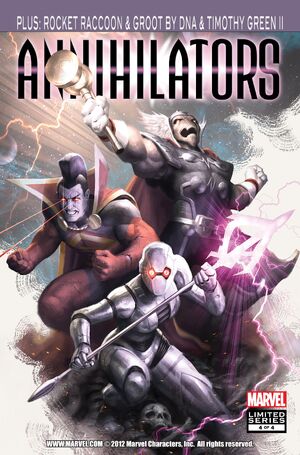 TWO AWESOME STORIES IN ONE COSMIC BOOK! This is it: the galaxy’s

most powerful squad and most beloved duo face their fiery finales! First, the Annihilators must prove they are the ace team of universal protectors that Star-Lord dreamed they could be...or perish in the attempt! Meanwhile, Rocket Raccoon and Groot face the horrible, reality-twisting menace – who has a key connection to Rocket’s secret past – that lurks in the heart of the Half-World Asylum! Want to show the House of Ideas that you want more Marvel Cosmic? Spread the word and buy this issue!

Retrieved from "https://heykidscomics.fandom.com/wiki/Annihilators_Vol_1_4?oldid=1732067"
Community content is available under CC-BY-SA unless otherwise noted.