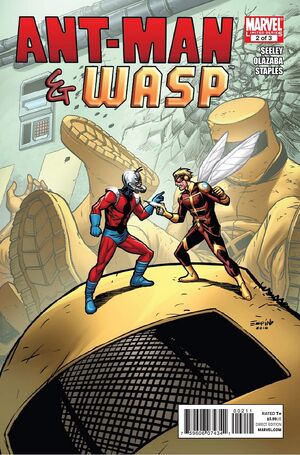 Ant-Man & Wasp have no time to make nice as they're tossed into the bizarre realm of the MINDSCAPE! A.I.M has the doorway to the afterlife, and it's up to the Tiny Twosome to jump from the land of dreams, to the land of heavily armed A.I.M soldiers! But Bill Foster's soul may not be the only thing Monica Rappacini wants as Scientist Supreme faces off with Supreme Scientist! Hop on for Hank Pym’s last adventure as Wasp (did you not see the solicit for AVENGERS ACADEMY #7?!) in this mini-series by acclaimed writer/artist Tim Seeley (Hack/Slash)!

Retrieved from "https://heykidscomics.fandom.com/wiki/Ant-Man_%26_The_Wasp_Vol_1_2?oldid=1659112"
Community content is available under CC-BY-SA unless otherwise noted.