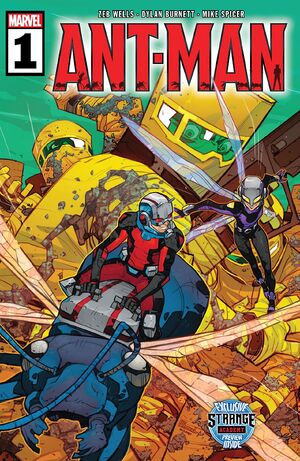 • Scott Lang has never exactly been the world’s best super hero. Heck, most people don’t even think he’s been the best ANT-MAN -- and the last guy invented Ultron and joined the Masters of Evil, so that’s saying something.

• But when the SUPERIOR IRON MAN calls with a once-in-a-lifetime opportunity, Scott’s going to get a chance to turn it all around and be the hero he’s always dreamed of being.

Retrieved from "https://heykidscomics.fandom.com/wiki/Ant-Man_Vol_2_1?oldid=1430535"
Community content is available under CC-BY-SA unless otherwise noted.