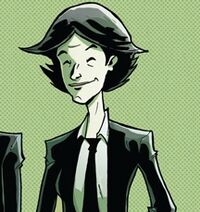 Toni Chu is the awkward, but ebullient fraternal twin of Tony Chu. She wears her heart on her sleeve and is one of the few Chu clan members to like Tony.

As an employee of NASA, she had worked in the jungles of Amazon for many years at the Farmington-Kapusta International Telescope. She would pass time licking hallucinogenic frogs along with the rest of the staff due to their over-funding.[1] At a NASA party, she hooked up with Caesar Valenzano in a broom closet when they both had drank too much punch.[2]

She was later reassigned to Gardner-Kvashennaya but never went due to the sudden prioritization shift with the fire-writing appearing in the sky.[3]

Toni was on the trail of someone working within NASA who was planning to sell a special bullet made of meteorite to the E.G.G. terrorists. When she confronted the man with her brother, the man was shocked she knew his plans. She took a bite of him and confirmed revealing her Cibovoyant powers.[4]

Toni was tricked by Chow Chu into using her NASA clearance to break into Barnabas Cremini's apartment to research a Quindim Buongio-Vannis painting. Later Chow revealed he only wanted to burn the recipes Cremini had stolen from him. Being family members, Toni said she couldn't stay mad at him.[5]

Toni hooked up with her NASA boss, Paneer, and strung him along on assignments. She used her 'doe' eyes to convince him to perform menial tasks for her.[1] Paneer soon proposed to her. When she bit into his shoulder, she accepted the proposal but secretly cried on Paneer's shoulder without him noticing.[6]

Over the next few weeks, Toni began eating beets in the same way her brother typically lives. When Paneer and Toni tried on wedding gowns for their wedding, she sneaked out the back door never to be seen again. The Vampire kidnapped Toni for her Cibovyant powers, which Toni had seen coming. After several hours of torture bites, The Vampire is unable to absorb her powers. Enraged, he snaps her neck.[7]

After much mourning and several weeks of time, when Tony brought Olive Chu a cigar box to introduce her to her mother, Tony was shocked to find two toes in the box. Toni had secretly cut off her toe, and stowed it in the box for Tony to eat later and communicate with his Cibopathic powers.[8]

Toni leads Tony through the events happening to him over the next few days. She helps him solve cases but ultimately whispers to him the way to defeat the Vampire. Tony was shocked at what she whispered and claimed he couldn't do such a thing. Toni assured him he could, and would, as she faded out and requested Toni to give one last message to Olive by letting her have the final bite of her toe. Olive was excited at the unknown message delivered to her.[9]

Template:Psychometry: Antonelle is able to see briefly into the future upon consuming something.[10]

Retrieved from "https://heykidscomics.fandom.com/wiki/Antonelle_Chu_(Chew)?oldid=1553276"
Community content is available under CC-BY-SA unless otherwise noted.