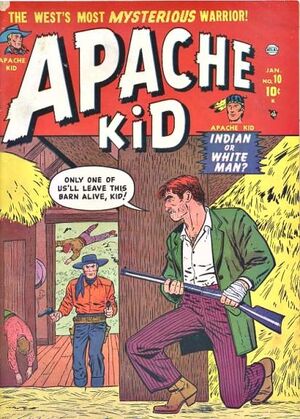 Appearing in "The Raid Of The Renegades!"Edit

Synopsis for "The Raid Of The Renegades!"Edit

After the Apache Kid helps Captain Bill Gregory and his troops fight it out a gang of outlaws led by a man named Kleazer, he asks Gregory for his aid. He explains that his father, Red Hawk, has been troubled by the local Blackeagle tribe and their leader Tall Beaver as they have gone renegade and have begun attacking white man and Native American alike and that they were in league with the outlaws they just fought. As they go after the escaped outlaws, Tall Beaver meets with them up the trail and formulates a plot to attack the Apache village. Meanwhile, Apache Kid and the soldiers follow the back trail when suddenly the Kid spots tracks leaving the area and fears the worst.

He leaves Gregory and his troops to follow the trail, pushing his horse Nightwind to his limit. Not far away, the Apache village is attacked by the Blackeagle's and they easily overpower Red Hawk and his warriors, taking the Apache camp. Soon, the Apache Kid arrives in his alter-ego of Aloysius Kare and poses as one of Kleazer's men. He tells Tall Beaver that Kleazer wants to meet him. When Tall Beaver and some of his warriors ride off to the phony meeting place, Kare jumps the last of the warriors in the group and steals his clothing, disguising himself as one of Tall Beaver's warriors. He then tracks down Kleazer and tells him to meet in the same place that he told Tall Beaver to go.

With both factions heading into a trap, Apache Kid changes back into his normal attire and rushes back and frees his father and the other Apaches. They then battle it out with Tall Beaver's men and when Kleazer's goons show up the army (who were laying in wait) mow them down as well. In the aftermath, Tall Beaver is shot dead by Bill Gregory when he tries to stab the Apache Kid in the back, ending the threat to the region.

The Native American warrior known as Red Arrow fires a flaming arrow into Fort Madison once again, as he has for one month. While the soldiers scramble to put out the flame, Red Arrow manages to elude capture. Later, some of the soldiers go into town and get a drink in the local saloon. Present is Aloysius Kare who overhears them talking about Red Arrow and decides to investigate. Leaving the saloon, Kare rides off and changes into his alter-ego, the Apache Kid.

The Kid follows Red Arrow's tail and is shocked to find him worshiping an idol to the fire gods that was once worshiped by a tribe of Native Americans who sacrificed themselves in flames. Apache Kid attacks Red Arrow, learning that the warrior believes that the idol speaks to him. The Kid believes this insane when suddenly the idol suddenly begins speaking, calling for the Apache Kid's destruction. Unphased by this, the Kid leaps into the idols mouth and finds another Native American inside and forces him to come out and reveal his deception.

The lone man explains that he is the last survivor of the fire worshiping cult, left behind when his people jumped into the sacrificial flames to atone for their evils. He informs both the Kid and Red Arrow that he posed as the inferno god and tricked Red Arrow to do his bidding. Having been defeated, the warrior then jumps into the flames around the idol, sacrificing himself for his failure. In the aftermath, Red Arrow thanks the Apache Kid for showing him the errors of his ways and setting him back on the straight path once more.

Appearing in "Where Danger Dwells!"Edit

Synopsis for "Where Danger Dwells!"Edit

Appearing in "The Winning of White Swan!"Edit

Synopsis for "The Winning of White Swan!"Edit

Seeing that his niece is troubled, Red Hawk asks White Swan what is bothering her. She explains that her problems are the same as always: That her love for the Apache Kid is not returned. Red Hawk tells her that unfortunately the Apache Kid is a born warrior and has no time for love, but White Swan is insistent that she wants to live his life of danger next to him. However, when Red Hawk tells her to be patient, White Swan informs him that she can wait no longer -- telling him that she has promised herself to Thundercloud of the Papajos tribe. She says this loud enough for the Apache Kid to hear as well.

The Apache Kid then rushes off to rescue White Swan, but since the Papajos would kill him on sight, he changes into Aloysius Kare and catches up with them. Kare then challenges Thundercloud to a fight to claim ownership of White Swan. Thundercloud gladly accepts the challenge, believing that a white man can be no match for him. However, Kare proves to be the superior fighter and easily defeats Thundercloud. While the warrior chief is down, he grabs White Swan and flees the area. To his surprise, White Swan is not impressed that she was rescued by Aloysius Kare, demanding that he put her down so she can walk home. She explains that she is furious that the Apache Kid did not come to her rescue and plans to have a terse conversation with him once she gets back to the village. Aloysius Kare rides off, joking about how he just can't figure out a woman.

Retrieved from "https://heykidscomics.fandom.com/wiki/Apache_Kid_Vol_1_10?oldid=1410028"
Community content is available under CC-BY-SA unless otherwise noted.