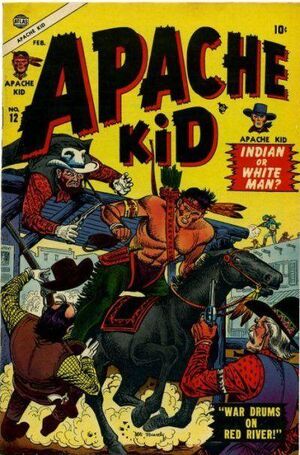 Appearing in "War Drums On The Red River!"Edit

Synopsis for "War Drums On The Red River!"Edit

Stalking Panther of the Croyo tribe sneaks into the Apache village and reports back to his father, chief Yellow Feather that their enemies are sleeping and suggest that they attack while their guards are down in retaliation for siding with the white soldiers at Fort Madison and so that he can take White Swan for his bride. Stalking Panther is furious that White Swan promised her love to Apache Kid, and so Yellow Feather instructs his son to deal with the Apache warrior himself. At that moment, unaware of the danger, the restless Apache Kid finds himself unable to sleep and decides to take a night ride on his horse Nightwind. He is ambushed by an attack party of Croyos led by Yellow Feather and Stalking Panther. Apache Kid is furious to learn that the Croyos are plotting to wipe out the soldiers at the fort and his people while Stalking Panther seeks to take White Swan as his bride. However, the brave warrior is easily subdued and tied to a stake while the Croyos prepare for war.

The Croyo war drums awaken the soldiers are Fort Madison and Captain Bill Gregory orders his troops to prepare for battle. At the same time the Apaches are also awoken and learn that Apache Kid is missing and prepare for battle as well. As the Apaches head to Fort Madison to assist in the battle, the Croyos swoop down from a ridge seeking to wipe them out as they approach the Fort. White Swan, fearing for Apache Kid's safety, finds him tied to the stake under the guard of Stalking Panther. While White Swan distracts Stalking Panther, she tosses a knife that cuts through Apache Kid's bonds. Apache Kid easily defeats Stalking Panther and then fires a red arrow into the Fort, signaling Captain Gregory to order his troops to assist the Apaches.

Appearing in "The Trail of the Coyote!"Edit

Synopsis for "The Trail of the Coyote!"Edit

In the town of Twin Rivers a local named Langley rides into town wounded by a gunshot wound. He tells those who come to his aid that he was shot by the Apache Kid. Listening in is Aloysius Kare who is shocked to hear this accusation placed upon his alter-ego. As Langley is being patched up, he tells the sheriff that the Kid robbed him of five thousand dollars. The sheriff decides to look into the claims and gathers a posse to go hunting for the Apache Kid. When Aloyisus Kare is asked to join the posse, he declines.

Slipping out of town Kare changes into his Apache Kid identity to investigate who is framing him for a crime he did not commit and clear his own name. Apache Kid is soon spotted by the posse but he manages to shake them. hiding in the woods, Apache Kid spots Langley riding out of town and jumps him easily. Apache Kid accuses Langley for framing him over the theft. Langley admits the crime and tries to kill Apache Kid in order to keep the truth from coming out. However, before Langely can stab Apache Kid with his knife, it is shot out of his hand. Langley is surprised to find the sheriff and his posse have overheard the entire confession. They soon round up Langley and the sheriff apologizes to Apache Kid for hounding him for a crime he didn't commit.

Appearing in "Kid Barrat: The Kid Who Downed the Killer King!"Edit

Synopsis for "Kid Barrat: The Kid Who Downed the Killer King!"Edit

Apache Kid pays a visit to Fort Madison and his friend Captain Bill Gregory. Bill warns Apache Kid that the Comanche's led by Grey Wolf are trying to convince Red Hawk and his tribe of Apaches to form an alliance in order to start up another Indian War. Apache Kid agrees to do what he can to insure peace in the region and rides off to the Apache camp. He arrives there just as Grey Wolf is pressuring Red Hawk to join his alliance. Apache Kid threatens to fire an arrow into Grey Wolf's heart, prompting the chief and his Comanches to leave, but Grey Wolf vows to get the Apaches to join his cause. When speaking to White Swan and Red Hawk after, Apache Kid is relieved to learn that the Apaches have no intention of joining the Comanches in their war.

However, that night a Comanche warriors sneaks into the Apache camp and kidnaps White Swan, part of Grey Wolf's plan to force Red Hawk into an alliance. The next morning Red Hawk is given the message and cannot bring himself to sacrifice the life of his niece and orders his warriors to prepare to go to war. Apache Kid then rushes off to Camp Madison and warns Bill, but asks Bill to give him a chance to stop the war and hold off on the counter attack. Bill agrees to give Apache Kid time but stresses that he must hurry.

As the Apaches sends a smoke signal indicating their compliance to the Comanches, Apache Kid changes into Aloysius Kare then wanders into the Comanche camp. As he planned, Aloysius is captured and thrown in the same teepee as White Swan. He frees the girl from her bonds and the pair effect an escape. Once they are clear of the camp, Kare orders White Swan to return to her people and get them to stop their war path. With the girl gone, Kare changes once more into the Apache Kid and returns to the Comanche camp. There Apache Kid challenges Grey Wolf to a fight to the death. The winner gets to decide if there will be peace or war.

During the fight, Apache Kid easily disarms Grey Wolf of a tomahawk and bests him in hand-to-hand combat. When Grey Wolf then takes a pot of boiling oil and attempts to throw it at the hero, the Apache Kid tosses a rock at it causing the pot to fall on Grey Wolf's head, killing him. With Grey Wolf dead, Apache Kid orders the Comanches to remain at peace and soon sends a smoke signal to Bill Gregory telling him that the threat of war is over. Apache Kid then returns to the Apache camp where Red Hawk thanks the Kid for rescuing his niece.

Retrieved from "https://heykidscomics.fandom.com/wiki/Apache_Kid_Vol_1_12?oldid=1410030"
Community content is available under CC-BY-SA unless otherwise noted.