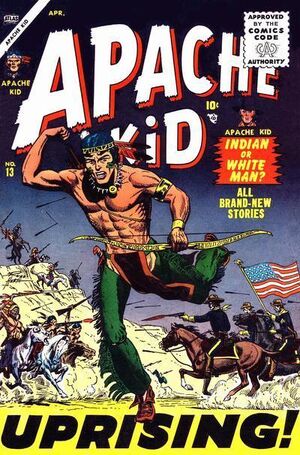 Appearing in "The Fury Of Red Stallion!"Edit

Synopsis for "The Fury Of Red Stallion!"Edit

The Apache Kid is taming a red wild stallion for his people unaware that he is being watched by a gang of horse rustlers who seek to steal the Apaches horses to sell for a hefty profit. Having succeeded in taming the red stallion, the Apache Kid takes it with his horse Nightwind to be delivered to his people. However along the way he realizes that he is being followed and sends Nightwind and the stallion ahead while he changes into his alter ego of Aloysius Kare. Then pretending to sleep he waits until the horse rustlers literally trip over him.

When the rustlers try to shoot him he fights back until he is forced to stand down. He then sends the rustlers the in the direction of the Apache horse pen telling them that is where the Apache Kid went. The rustlers tie up Kare and leave a guard while they follow after Nightwind's trail. While the guard is busy gloating over their eventual victory, Kare breaks free from his bonds and changes into the Apache Kid and easily subdues him and follows after the other rustlers. When they arrive it is just as the rustlers are releasing the horses and finding them all, particularly the red stallion, unwilling to cooperate. The Apache Kid attacks them, and holds his own until the rest of the Apaches in the region come to aid their ally after hearing the gun shots.

The leader of the rustlers tries to shoot the Apache Kid with his guns but the hero shoots the guns out of his hands using his arrows. The red stallion then attacks him and forces the rustler off a cliff sending him falling to his death. With the rest of the gang rounded up to be taking to the white authorities the Apaches thank the Apache Kid for saving their horses, but the Apache Kid informs them that he is setting the red stallion free because it earned its freedom that day.

Going to the local Apache Tribe to take part in a council meeting the Apache Kid is shocked when Wampou has decreed that the Kid is to die under orders from Poison Arrow a being who has claimed to be a messenger from the gods. The Apache Kid is subdued and is taken to a nearby mountain to be attacked and killed by the vengeful eagles that live there, swearing on his life that he will not leave there.

The Apache Kid complies at least partially, changing into his alter ego of Aloysius Kare in order to slip away so he can confront Poison Arrow and learn if the claims that he is a messenger of the gods are true or not. When he runs into Wampou, Aloysius tells him that the Apache Kid has been killed by the eagles. When Wampou leaves, Kare follows him to his rendezvous with Poison Arrow. However, Poison Arrow has spotted Aloysius following after Wampou and attacks both of them with poisoned arrows. When Wampou is struck with one of the arrows, Kare saves his life and sends him off on Nightwind to get medical treatment.

Poison Arrow fires one of his poisoned arrows at Kare, who easily shoots it out of the air then throws Poison Arrow off his horse. Ironically, Poison Arrow lands on his own poisoned weapon and facing imminent death reveals that he is fraud and that he wanted to remove Apache Kid as he was the only person who stood in his way to taking over the tribe and going to war against the white settlers in the area. Kare leaves and returns as the Apache Kid who is welcomed back by his people and Wampu apologizes having realizing the errors of his ways.

The Apache Kid is suddenly attacked by a Cayuga war party led by the renegade Flying Cloud, who was previously believed to have been killed. Flying Cloud seeing the Apache Kid as the only threat to his plans orders his men to kill the Apache warrior, but the Kid manages to escape and changes into his alter-ego of Aloysius Kare in order to maintain a lower profile. Riding along the range he comes across a wagon of settlers whom he tries to warn of the growing Cayuga hostilities, however the father of the wagon train does not believe Kare as he was told by the local fort that the Cayuga and Apaches have signed a peace pact. When Kare tries to press the issue the father pulls a gun and demands that Kare leave them alone.

Not willing to see the harmless family be slaughtered, Kare tires to warn the military, the Apaches, but finds that nobody is willing to listen. Eventually his warnings are seen as stirring out trouble and the sheriff has Kare arrested and locked in the local jail. Changing into the Apache Kid, Kare calls his horse to the bars of his cell and uses the ropes on his horse to pull the bars on his windows. Making it look as though Aloysius Kare is sleeping in the bed of his cell, the Kid rides off to defend the family out of the range.

He arrives too late as the the family has previously been attacked and the father of the party wounded. The Apache Kid convinces the man's son that he is no threat and stands with the boy in fending off a counter attack by Flying Cloud and his men. The Apache Kid fights them to a stand still and then challenges Flying Cloud to a one on one duel. Flying Cloud tries to slay the Kid with a tomahawk and bow and arrow, but the Apache Kid easily disarms him each time. When faced with hand-to-hand combat the cowardly Flying Cloud orders his followers to slay the Apache Kid, but his cowardice convinces the Cayuga to slay him instead. The battle had roused the military and the Apache to come and investigate the scene and learn that their disbelief was incorrect.

Retrieved from "https://heykidscomics.fandom.com/wiki/Apache_Kid_Vol_1_13?oldid=1410031"
Community content is available under CC-BY-SA unless otherwise noted.