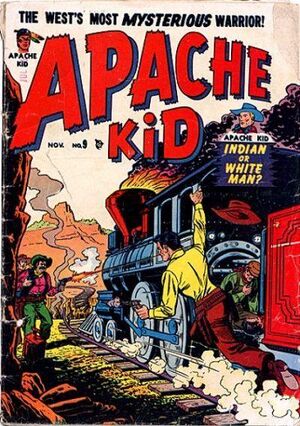 Appearing in "The Flaming Border!"Edit

Synopsis for "The Flaming Border!"Edit

Captain Bill Gregory and his soldiers have Gunner Simmons and his gang pinned down. However Gunner and his 10 best men manage to get away after convincing the others to stay and cover them. Spotting Simmons' getaway is Aloysius Kare who breaks off from the attack to follow him as the Apache Kid. The outlaws hide out in an abandoned oil well and manage to wing the Apache Kid as he rides by causing him to fall off his horse. Gunner takes the Kid prisoner and plans to use him against his enemies.

Shortly thereafter, Apache Kid's horse Nightwind returns to the Apache village. Seeing the horse returning with out it's rider, Red Hawk correctly deduces that his adopted son is in trouble and orders the Apaches to get ready for battle and follow Nightwind back to his master. When the Apaches arrive at the oil well, they find the Apache Kid tied to the well. Gunner threatens to kill Apache Kid unless Red Hawk takes a message back to Bill Gregory and demand that he let his men go free. Apache Kid tells them to do as Gunner says. Red Hawk trusts that the Apache Kid has a plan and complies.

Soon the Apaches and soldiers return with Gunner's captured men and release them over to Gunner. When the soldiers and Apaches back off, Gunner is true to his word and sets the Apache Kid free. Before his men can escape, the Apache Kid dives toward the Apaches discarded weapons and uses a flaming arrow to light the oil well on fire. With their escape closed off by flames, Gunner and his men are soon swarmed by both the Apaches and soldiers. While the outlaws are being rounded up, Gunner Simmons manages to escape and heads towards the state border with Apache Kid hot on his trail. The Kid manages to catch up at the border and tackles Simmons off his horse. As the two struggle, the Apache Kid lands a punch that sends Simmons flying across the state line where he suffers a fatal blow to the head when he strikes some rocks.

With Simmons dead, Apache Kid returns to the battle to find that the soldiers and the Apaches have finished off Gunner's gang. He informs Bill and Red Hawk that Simmons died getting what he wanted.

Appearing in "The Hunting of Running Moose!"Edit

Synopsis for "The Hunting of Running Moose!"Edit

During a powwow to deal with the those who have broken tribal law, Running Moose as been brought before Red Hawk for his various crimes against the tribe in his quest for power. It is the opinions of the others that Running Moose get no mercy. However, the Apache Kid steps shocks everyone by stepping in to speak in favor of his old foe. The Kid asks that Running Moose be let free and that he will bare responsibility for any crime that Running Moose has committed. He stands by his decision even though both Red Hawk and White Swan protest this decision, knowing that Running Moose will do anything to destroy his hated foe.

The day after being free, Running Moose goes to a local saloon where he sees roving cowboy Aloysius Kare (unaware that he is really Apache Kid in disguise) in an argument with Captain Bill Gregory over fighting the Apaches. The argument ends with Kare punching out Gregory and storming out. Seeing Kare as the ideal ally, Running Moose follows after him and offers him a chance to get back at Gregory by attacking Apache Kid, since they are close friends. Kare agrees, and Running Moose tells him to lure the Apache Kid to Dead Eagle canyon and that he will do the rest. As Kare rides away he changes back into the Apache Kid with his worse fears confirmed: that Running Moose is plotting against him again, the ruse having paid off.

Apache Kid returns to the Apache village and tells Red Hawk and the others that Running Moose has betrayed his trust and they follow him out to Dead Eagle Canyon. When Running Moose calls Apache Kid a coward, the Kid points out that he has brought their people to prove Running Moose's treachery. Apache Kid then tells Running Moose that he is coming after him alone and unarmed. White White Swan protests this plan, Running Moose gloats as he is confident that he can kill the Kid with his knife.

Appearing in "The Sacrifice of White Man!"Edit

Synopsis for "The Sacrifice of White Man!"Edit

For a whole month the Apaches have been struggling to survive during a drought. One of the Apaches named Mighty Thunder believes that the gods are angry with them and that they demand a blood sacrifice in order to bring the rain. He has gathered a group of followers who agree with him when he suggests that Red Hawk be sacrificed to appease the gods. They then began to beat drums calling for the rains.

Hearing this from their teepee, the Apache Kid and Red Hawk fear that something is amiss among their people. When Apache Kid decides to go and quash the rebellion, Red Hawk intervenes telling Apache Kid that they must follow the laws of the tribe, that if a drought strikes the chief must die to appease the rain-gods. Although the Apache Kid considers this insanity he agrees to follow his adopted father's wishes. However he has come up with a possible solution to the problem and promises to be back before the execution. Apache Kid rides out of the village as White Swan watches on.

Away from the camp, the Apache Kid changes into his alter ego of Aloysius Kare as in his Apache guise he cannot work against the tribe. As Kare rides off, he is spotted by Mighty Thunder and his followers who decide to deal with the meddlesome cowboy. They follow as Kare rides to Fort Madison where he convinces Captain Bill Gregory to intervene with the army. As soon as Kare leaves, Bill goes out to rally his troops but is knocked out by Mighty Thunder who wants to carry out his sacrifice without interruption.

Mighty Thunder then rides back to the village and orders Red Hawk surrender himself to be burned at the stake. Before he can, White Swan steps in and offers her life instead, catching Mighty Thunder in a bit of tribal law that states that a maiden can offer her life in the place of the chief. Mighty Thunder insists that Red Hawk is the one to be sacrificed, but his followers accept White Swan as a replacement.

Meanwhile, Aloysius Kare rides toward the Apache camp and realizes that not only is he too late, but the Apaches have replaced Red Hawk with White Swan as a sacrifice. Kare tries to stop the sacrifice, trying to convince the Apaches that there is no such thing as rain-gods. However, the Apaches -- inflamed by Mighty Thunder -- refuse to listen and pull Kare off his horse and tie him along side White Swan to burn alive.

With White Swan and Apache Kid about to burn alive, Red Hawk makes a final appeal to the rain gods and surprisingly it begins to rain putting out the fire. Kare breaks free from his bonds and spotting Mighty Thunder attempting to flee. Kare tackles him and forces him to admit that he manipulated the Apaches in order to try and overthrow Red Hawk. Defeated Might Thunder confesses to his crimes.

Retrieved from "https://heykidscomics.fandom.com/wiki/Apache_Kid_Vol_1_9?oldid=1410027"
Community content is available under CC-BY-SA unless otherwise noted.