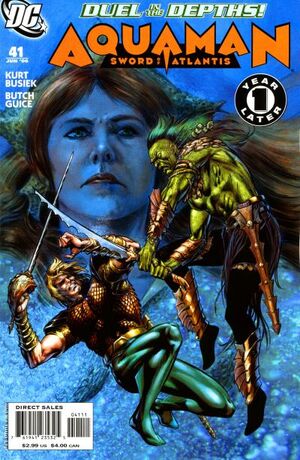 Appearing in "Once and Future, Part 2 of 6: Over His Head"Edit

Synopsis for "Once and Future, Part 2 of 6: Over His Head"Edit

Two days after falling into the sea, Arthur Joseph Curry is digging through the wreckage of the Curry-Jonas Oceanographic Center on the surface in Avalon Cay. The recent storm has completely destroyed the facility, and there is no sign of Arthur's parents. Further, an employee named Eric apparently died from a gunshot wound, indicating more happened than just the storm. Soon Arthur, who cannot properly breathe above water, begins to suffocate. King Shark drags him beneath the waves, and informs the Dweller in the Depths that by saving his life he repays his debt. Despite the Dweller's protests, King Shark swims away. The Dweller agrees to help Arthur find his parents, and they decide to visit Arthur's great-uncle, a lighthouse-keeper in Maine. Before they can set off, however, they are met by Juriti of the Mer, who bears a message from Queen Mera of Atlantis. She wishes to thank Arthur for saving some of her people from Aurati raiders. The Dweller convinces Arthur he needs allies, but finds himself unable to enter Queen Mera's presence.

Mera, apparently recovered from the curse that confined her to the surface, has been leading the remnants of Atlantis after its destruction. Without Atlantis to police the seas, barbarians have taken over, and the Atlanteans are a broken shell of their former selves. Mera seeks to convince Arthur to join them, but she is interrupted by Atsiul. One of the captives Arthur rescued, Atsiul objects to Arthur's alliance with King Shark, and insists that the captives freed themselves. Angered, Arthur challenges him, and insists on a duel despite many opportunities to back down. At first Atsiul's superior skill allows him to dominate the match, but Arthur soon finds superheroic reserves of strength, and turns the tables. Before he can kill Atsiul in a fit of anger, however, he is interrupted by King Shark, who insists they have places to be.

Retrieved from "https://heykidscomics.fandom.com/wiki/Aquaman:_Sword_of_Atlantis_Vol_1_41?oldid=1409641"
Community content is available under CC-BY-SA unless otherwise noted.