Aquaman: The Trench is the first story-arc of the Aquaman series in the New 52 relaunch, beginning his DCnU canon following the history-changing events of Flashpoint. Dealing with a new menacing threat under the sea, a carnivo 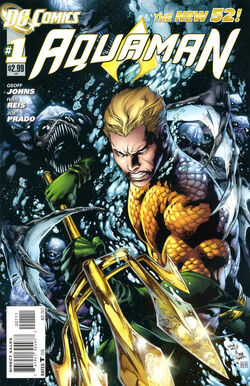 Aquaman: The Trench is the first story-arc of the Aquaman series in the New 52 relaunch, beginning his DCnU canon following the history-changing events of Flashpoint. Dealing with a new menacing threat under the sea, a carnivorous race known as The Trench, it also solidifies the character's backstory in new continuity. It was written by Geoff Johns and illustrated by Ivan Reis. This marks an official return to his Silver Age origin story, removing the previous origin Time and Tide from canon.

The storyline takes place after Aquawar and is followed by The Other League, both also written by Johns.

Aquaman, having recently taken up residence in the Boston area, deals with the assumptions and prejudices the public have about him. Despite the general populace believing that he is useless and ridiculing him about the stupidity of his powers, he quickly proves their misconceptions wrong and demonstrates his authority. Back at Amnesty Bay, he tells Mera that he is completely abandoning Atlantis and wants to pursue a life together with her on land.[1] He is called in to deal with a waterfront attack by an underwater race of carnivorous monsters called The Trench who devastated a small harbor. During his investigation, the beasts return and they must fight off an invasion to protect the civilians.[2] Successfully driving off the predators, he reaches the conclusion that they must've taken some captives alive to bring back to their home. To find clues about them Aquaman pays a visit to marine biologist Stephen Shin, the man who taught him how to use his powers and then tried to kill him. They take his guidance and descend into the Marianas Trench.[3] Discovering an entire underground civilization, they realize that the Trench are a dying species desperately trying to feed their children and queen. They live in an ancient Atlantean craft deep underwater whose inhabitants they seem to have killed long ago. Despite his reluctance to cause the extinction of an entire race, Aquaman has no choice and he seals them inside a volcano while Mera brings the captives to safety. Having saved the day, they return home. One of the police officers brings them a dog made homeless by the attacks; they decide to take him in and start calling him Aquadog.[4]

Retrieved from "https://heykidscomics.fandom.com/wiki/Aquaman:_The_Trench?oldid=1517103"
Community content is available under CC-BY-SA unless otherwise noted.