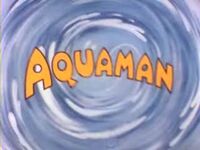 "Aquaman – swift and powerful monarch of the ocean, with the ability to summon and command all creatures of the deep. Aquaman – who with his teenage ally, Aqualad, guards and defends all that lives in the seas against the forces of evil. Aquaman – King of the Seven Seas!"

Aquaman was originally produced as a twelve-minute segment of the Superman/Aquaman Hour of Adventure series produced by Filmation in 1967. The series aired from September 9th, 1967 until May 1st, 1968. In September of 1968, Filmation repackaged the Aquaman vignettes as part of its own eponymous animated feature. The series featured the adventures of Aquaman and his teen-sidekick Aqualad, as they sought to protect the undersea city of Atlantis from a gallery of foes including Black Manta, the Fisherman, Nepto, Torpedo Man, Captain 'Cuda and Mirror Man (not to be confused with Mirror Master). Aquaman and Aqualad (frequently referred to by the uncomplimentary nickname "Tadpole") rode atop giant sea horses named Storm and Imp. Even Mera kept a sea horse, chauvinistically colored pink to reflect Mera’s feminism. Rounding out the cast was a fun-loving walrus named Tusky, who possessed the ability to travel to the deepest depths of the ocean, despite the fact that he was a mammal. Tusky was sometimes accompanied by Topo, an octopus who made frequent appearances in the Aquaman comic stories from Adventure Comics. The character of Aquaman was later recycled for the 1973 animated series Super Friends, this time voiced by actor Norman Alden.

Retrieved from "https://heykidscomics.fandom.com/wiki/Aquaman_(TV_Series)?oldid=680995"
Community content is available under CC-BY-SA unless otherwise noted.