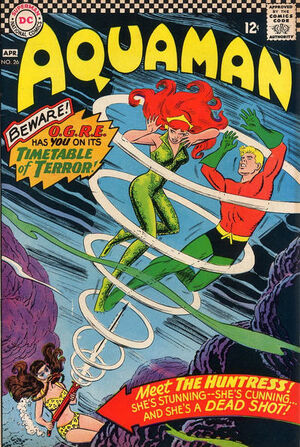 Appearing in "From O.G.R.E. With Hate"Edit

Synopsis for "From O.G.R.E. With Hate"Edit

Aquaman and Mera go undercover as “Mr. and Mrs. Waterman”, a vacationing couple, to help American intelligence discover the current plot of O.G.R.E., a criminal band. The Supreme One, a high-level O.G.R.E. agent, sends his operatives The Huntress and Typhoon to attempt assassination of them. After an initial battle with the villains, Aquaman and Mera succeed in turning the Huntress and Typhoon to their side. The Supreme One, who had discovered and taken over a deserted secret atomic rocket factory, is apprehended and unmasked as the manager of a hotel at which Aquaman and Mera were staying.

Retrieved from "https://heykidscomics.fandom.com/wiki/Aquaman_Vol_1_26?oldid=1509445"
Community content is available under CC-BY-SA unless otherwise noted.