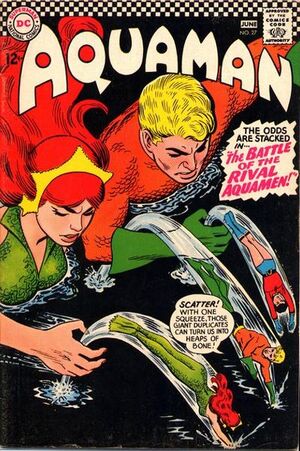 Appearing in "The Battle of the Rival Aquaman"Edit

Synopsis for "The Battle of the Rival Aquaman"Edit

Aqualad is confused when he is suddenly attacked by Mera and Aquaman. While avoiding Mera's hardwater scoop, he discovers that his attackers are imposters. The real Aquaman and Mera arrive to help Aqualad and subdue their duplicates, whom then disappear. Aquaman discovers the imposters were energy duplicates created by an alien zookeeper named Xen. The alien wants to catch Aquaman for his undersea zoo, so he creates another set of duplicates. The new duplicates are giants, and one is able to abduct Aquaman, Mera, and Aqualad.

Before Xen can leave Earth, Aquaman summons his fish subjects to break him loose along with other alien prisoners. Xen sends an army of duplicates to stop his escaped prisoners. While the abductees fight to defend themselves, Aquaman and Mera steal the duplicator ray from Xen. Using duplicates under his own control, Aquaman defeats Xen's forces, and sends the aliens home with their abductor in custody.

Retrieved from "https://heykidscomics.fandom.com/wiki/Aquaman_Vol_1_27?oldid=1509179"
Community content is available under CC-BY-SA unless otherwise noted.