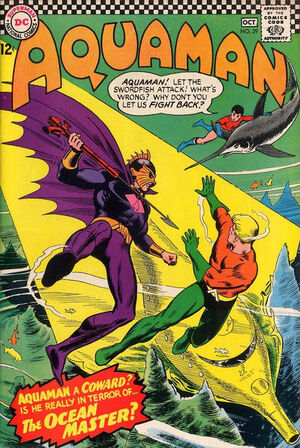 When the Ocean Master endangers all shipping via a booby-trapped whale that causes aquatic disasters, Aquaman and Aqualad are called upon to stop him. But Aquaman refuses to fight the Ocean Master, though he and Aqualad do destroy the whale. The Sea King explains that Ocean Master is really Orm Marius, his half-brother. Tom Curry, Aquaman’s father, remarried after the death of Aquaman’s Atlantean mother Atlanna and had another son, who naturally could not inherit Aquaman's water-breathing powers and was jealous of his older sibling; as a result of which he got into trouble with the law repeatedly. A blow to the head caused him amnesia, after which he eventually became Ocean Master. Though the villain gets away, Aquaman knows that he will face him again in the future, and does not know what his course of action will be.

Retrieved from "https://heykidscomics.fandom.com/wiki/Aquaman_Vol_1_29?oldid=1504707"
Community content is available under CC-BY-SA unless otherwise noted.