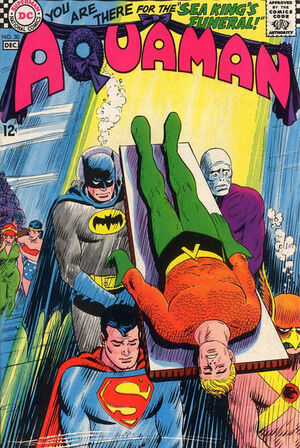 Appearing in "The Death of Aquaman"Edit

Synopsis for "The Death of Aquaman"Edit

Even though Aquaman is imprisoned by Mongo, the tyrant of the evil undersea city of Necrus, he is able to employ an alien duplicator device to create a second Aquaman to save Atlantis from the villain. However, the duplicate Aquaman dies in battle.

Retrieved from "https://heykidscomics.fandom.com/wiki/Aquaman_Vol_1_30?oldid=1509181"
Community content is available under CC-BY-SA unless otherwise noted.