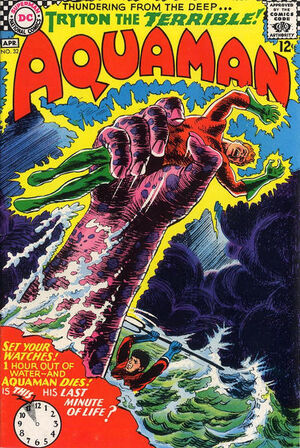 Appearing in "Tryton the Terrible"Edit

Synopsis for "Tryton the Terrible"Edit

Aquaman faces double dangers--the Ocean Master, who has stolen an American atomic missile, not knowing the device is primed to detonate soon, and Dr. Tryton, an ancient Atlantean scientist transformed into a maddened giant. Nonetheless, Tryton wrests the weapon away from the Ocean Master and smothers its detonation with his own body, dying in the process. The Ocean Master escapes, swearing vengeance on Aquaman.

Retrieved from "https://heykidscomics.fandom.com/wiki/Aquaman_Vol_1_32?oldid=1509183"
Community content is available under CC-BY-SA unless otherwise noted.