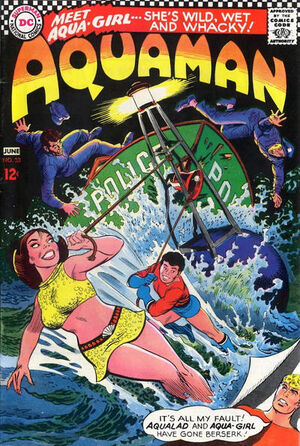 Aquaman and Aqualad help rescue passengers from a jet plane that crashed into the ocean. Aqualad keeps the younger survivors calm by getting them to engage in a sing-along. Moments later, Aqualad meets Tula, a girl he once remembered as a "gawky pig-tailed kid". Tula is all grown up now and has set her sights on Aqualad. She convinces him to abandon his position as Aquaman's sidekick to spend his days dancing and partying with her. Aqualad dubs her "Aquachick" and brings her back to Atlantis. He tells Aquaman and Mera that he is leaving and Mera explodes with anger. Aquaman calms her down and tells her that Aqualad must make his decisions.

Aqualad and Aquagirl go to an underwater discotheque operated by a man named Doctor Dorsal. Dorsal is secretly a water-breather like them, but hails from another dimension. Impressed with the teens' skills, he hires them on as his house dancers. Aqualad and Aquagirl become huge hits and earn the admiration of their deep sea diving, air-breathing peers.

There is more to Doctor Dorsal than meets the eye though. After the dance club closes, he brings Aqualad and Aquagirl into his private office where he uses two special eels to hypnotize them. He decides to use them commit grandiose thefts on his behalf.

Bringing their new Go-Go friends with them, they first go to King Pier and rob the amusement park's ticket booth. Later, they raid a yacht and rob the patrons of their cash and jewels. Aqualad and Aquagirl have no use for the money, and are only committing the crimes for kicks. Dorsal continues to have them commit petty thefts, solidifying their fates as career criminals.

Some time later, Aqualad, Aquagirl and the Aqua-Kids are on the beach, hiding out from the Coast Guard. They encounter an elderly shell picker who warns them that the Coast Guard has learned where they are hiding. Deciding that this shell picker is their new friend, they decide to bring him along to Doctor Dorsal's lair. Dorsal suspects that the man is actually a spy and keeps a close eye on him. His suspicions prove correct as he finds the shell picker trying to send a message to the Coast Guard.

Doctor Dorsal sends his hypnotized thieves out on their most ambitious plot yet - to rob a Naval submarine base. He warns Aqualad and Aquagirl about the shell picker and they decide to bring him along to keep an eye on him. While swimming towards the base, they come upon an electrified mine field. Aquagirl grabs the shell picker and throws him into the mines, causing them to detonate, seemingly killing the old man in the process. As they inspect his body, Aqualad discovers that the old man is actually Aquaman in disguise. The horror of seeing his mentor breaks Dorsal's hypnotic hold over him and he returns to normal. Aquagirl is likewise freed from the hypnosis and the two race back to Dorsal's lair to mete out their revenge. Doctor Dorsal manages to escape capture however, by diving through a dimensional portal back to his native realm.

Aquaman appears before them, revealing that he is still alive. The mine field only stunned him. Aqualad and Aquagirl are grateful to see Aquaman again and agree to return to Atlantis.

Retrieved from "https://heykidscomics.fandom.com/wiki/Aquaman_Vol_1_33?oldid=1517110"
Community content is available under CC-BY-SA unless otherwise noted.