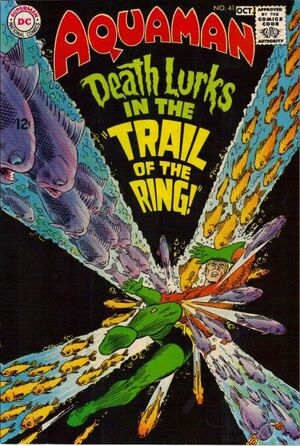 Appearing in "The Trail of the Ring"Edit

Synopsis for "The Trail of the Ring"Edit

After Aquaman returns empty-handed, he asks Zancol, an undersea traveller, about the five-sided ring. Zancol replies that such rings can be found in the land of the Maarzons, three days’ journey from Atlantis, except for one direction, through the perilous, unexplored Depths, which will cut his journey down to one day’s duration. On his way, Aquaman first encounters strange yellow gnome-creatures who telepathically induce fish to batter him. Then he comes upon a strange city, where he kills a glowing monster who was about to devour a woman and is arrested for it. Aquaman learns that the monsters provide the city with heat and light, and are allowed to kill the occasional human in return. Before he can be imprisoned, Aquaman breaks free, jumps astride another monster, and rides it out of town, threatening to kill it if the populace doesn’t allow him to leave. Once in the clear, Aquaman leaves the monster, jumps on his sea horse, and resumes his journey.

Retrieved from "https://heykidscomics.fandom.com/wiki/Aquaman_Vol_1_41?oldid=1509189"
Community content is available under CC-BY-SA unless otherwise noted.