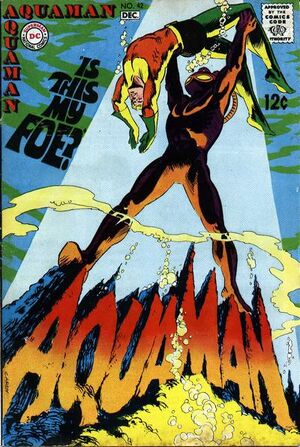 Appearing in "Is This My Foe?"Edit

Synopsis for "Is This My Foe?"Edit

Aquaman finally makes it to the land of the Maarzons, a tribe of hostile, primitive underwater people who attack all outsiders. In the midst of the battle, he is astonished to see Black Manta, his old enemy, who has gained dominion over the tribe. When Black Manta learns Aquaman is searching for the missing Mera, he says that Aquaman shall learn of her if he fights him in a personal duel. Aquaman agrees, but is wounded in the arm during the duel. Nonetheless, he defeats Black Manta. The villain manages to become invisible and escape in his undersea craft, but tells Aquaman before he departs that he knows nothing of Mera’s whereabouts. Meanwhile, in Atlantis, Aqualad is still recuperating from his own wound, and Narkran, whom Aquaman has left as ruler in absentia, is becoming tyrannic.

Retrieved from "https://heykidscomics.fandom.com/wiki/Aquaman_Vol_1_42?oldid=1509190"
Community content is available under CC-BY-SA unless otherwise noted.