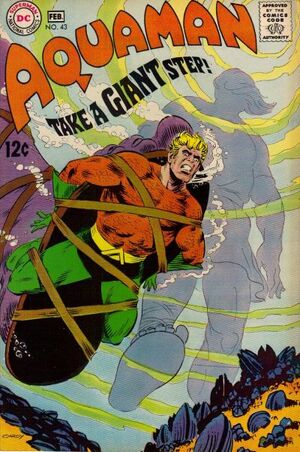 Appearing in "To Win is to Lose!"Edit

Synopsis for "To Win is to Lose!"Edit

While Aquaman encounters a race of slow-moving giants and is taken in by Phil Darson, a surface man in a submarine, Aqualad recovers from his wound and attempts to track down Aquaman, first going to the site of the Sorcerers’ city. But the city has faded into another realm, and the young hero is taken captive by hostile purple beings, the Elfdurans, who force him to fight in their arena as a gladiator. Aqualad fights valorously, but is eventually kayoed. The Elfduran ruler believes Aqualad may be strong enough to defeat the Bugala, a monster that has killed many of their people. Meanwhile, in Atlantis, the populace suffers an earthquake.

Retrieved from "https://heykidscomics.fandom.com/wiki/Aquaman_Vol_1_43?oldid=1509191"
Community content is available under CC-BY-SA unless otherwise noted.