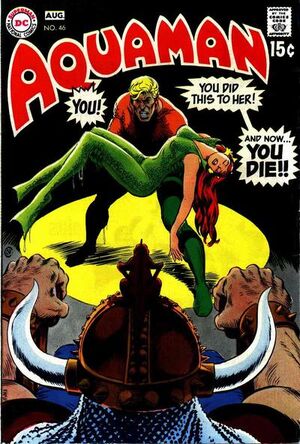 Mera gets Aquaman into an ambulance and rides with him to a hospital. On the way, she reviews what has happened to her recently: she was abducted by exiled Atlantean thieves working hand-in-hand with the crime syndicate. The syndicate had recently gained the services of the now-dead scientist, whose invention allowed them to create artificial whirlpools, and, with Mera’s hard-water powers, the criminals could easily loot ships at sea. Mera was told (falsely) by the syndicate boss that Aquaman was also their captive, and would be harmed if she refused to help them. Finally, she was freed from her cell when a thug Aquaman fought against slammed into the release mechanism. She fought past her guards, managed to return to the sea, and found Aquaman, rescuing him with her powers as the whirlpool mechanism in the crooks’ headquarters malfunctioned and exploded. In the meantime, Vulko tells Narkran that Atlantis may return to the surface if the quake activity continues, and Narkran is overjoyed, telling the scientist that Narkran shall rule over a surface kingdom. Aquagirl is taken in by rebels who wish to end Narkran’s increasingly despotic rule, and Aqualad still battles with the Bugala.

Retrieved from "https://heykidscomics.fandom.com/wiki/Aquaman_Vol_1_46?oldid=1509194"
Community content is available under CC-BY-SA unless otherwise noted.