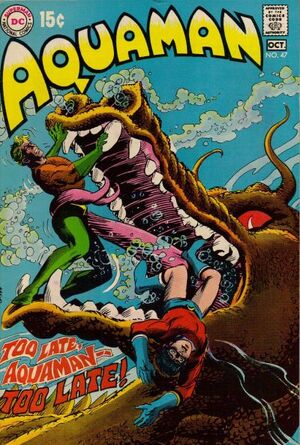 Appearing in "Come the Revolution"Edit

Synopsis for "Come the Revolution"Edit

Synopsis for "The Adventures of Aquaboy!"Edit

During a storm out at sea, Aquaman rescues an old man who is swept off his boat, taking him to safety on an island he finds out that the old man is blind who spent the past 12 years on a deserted island where he collected a fortune in oysters. When he finally gained enough to pay for an operation to restore his sight tragedy struck and the accidentally fell overboard. When Aquaman offers to help recover them, the old man doesn't believe him thinking Aquaman a thief and that his abilities can't possibly be real.

Suddenly, Aquaman recognizes the old man as somebody he met years before when he was Aquaboy. He explains how years ago with the help of some whales, Aquaman prevented the old man's ship from sinking and back then, as now, he didn't believe in any of Aquaman's super-feats. Aquaman attempts to convince the old man by telling him stories of his youth, like when he plugged a hole in a dyke with his body, or when he helped archaeologists find sunken roman treasure. None of the tales convinces the old man that Aquaman is on the level.

It finally takes a seaquake knocking the old man back into the water and Aquaman summoning a whale to safe his life does the old man finally believe Aquaman is telling the truth. Telling Aquaman where the pearls were dropped, the hero recovers them and returns them to the old man who thanks Aquaman for his help.

Retrieved from "https://heykidscomics.fandom.com/wiki/Aquaman_Vol_1_47?oldid=1509195"
Community content is available under CC-BY-SA unless otherwise noted.