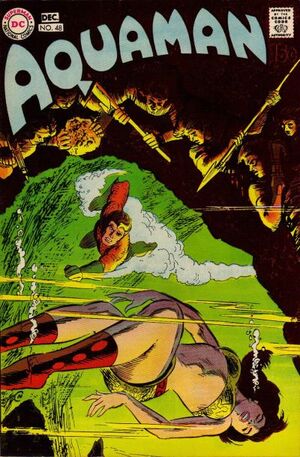 Appearing in "A Kingdom to Rebuild!"Edit

Synopsis for "A Kingdom to Rebuild!"Edit

Synopsis for "How Aquaman Got His Powers!"Edit

One day a US Military submarine is testing a new type of atomic warhead, Aquaman summons various sea life to help him disarm the warheads. Boarding the ship, Aquaman meets the captain and asks him not to test the weapons. Asking for an explanation, Aquaman leads the captain away from the crew and tells him the story of how he got his powers.

Aquaman explains that some years ago an ex-sailor who now lived the life of a lighthouse keeper saw a woman on a raft caught in a raging hurricane. Coming to her rescue, he learned the woman's name was Atlanna. The two fell in love, and a year later Atlanna gave birth to a young boy. As the boy grew up, his father was shocked to find that the boy could swim, breath under water and communicate with sea life. Sometime later, Atlanna became ill and on her death bead explained to her son and husband that she was really from the lost city of Atlantis who's people could live under the sea, and that she was forced into exile by her people. In her dying breath, she tells her son that he would one day be ruler of the oceans.

Thus the widowed lighthouse keeper trained the boy to control his powers, and sent him to school on the surface to get an education. Eventually the lighthouse keeper died and was buried at sea and the boy became the hero known as Aquaman. With his story finished the submarine captain asks Aquaman why he shouldn't test his warheads in this location, and Aquaman tells him in secret that it is the location of the lost city of Atlantis. As the submarine relocates, Aquaman swims past Atlantis, hoping to someday introduce himself to the people that live there.

Retrieved from "https://heykidscomics.fandom.com/wiki/Aquaman_Vol_1_48?oldid=1509196"
Community content is available under CC-BY-SA unless otherwise noted.