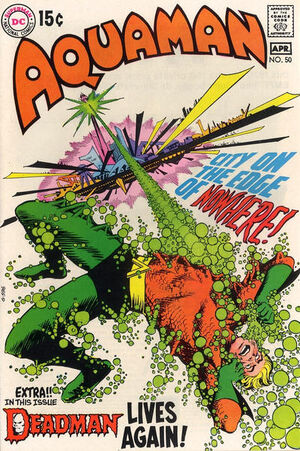 Appearing in "Can This Be Death?... The City on the Edge of Nowhere"Edit

Synopsis for "Can This Be Death?... The City on the Edge of Nowhere"Edit

Aquaman and Aqualad return to Atlantis to encounter Ocean Master with Mera. After Ocean Master reveals that he knows he and Aquaman are brothers, he tells them that he has come to warn him about “them”. Before anything more can be said, a spacecraft and two aliens emerge from a space-warp near them and Aquaman is hit by a ray-blast that renders him unconscious. When he awakens, he is in another realm, where the atmosphere has the consistency of water. He saves a girl from a strange one-celled life-form and follows a telepathic trail to a city nearby, accompanied by the girl, who remains telepathically silent. After he fights his way past a guard, Aquaman enters a kind of church, filled with telepathic people. The girl, who enters behind him, explains that, by their beliefs, communication can only take place in this sacred place. However, she can only tell him that they are in “The City”, and she knows nothing except that and the wilderness beyond. Before much else can be said, they are confronted by the Citizens’ leader, Brother Warnn.

Deadman is sent by Rama Kushna to the submarine craft of Ocean Master, who meets with aliens bent on conquest of the Earth. Ocean Master reveals that his half of the bargain involves them killing Aquaman. In order to save the sea king, Deadman possesses Ocean Master, but finds one section of his mind seemingly walled off. Deadman concentrates his efforts on breaking through the barrier, and finally succeeds, though the effort so tires him that he has to depart Ocean Master’s body for a “breather”. But his actions have freed Ocean Master’s repressed memories, and he finally recalls that Aquaman is his brother. In remorse, he speeds off to Atlantis to warn him. Figuring that Aquaman will be safe now, Deadman returns to the aliens, and learns they are planting devices that will reduce the mentality of Earthlings by 25 percent. He takes over the body of Pfall, an alien, but inadvertently reveals his possession to the other aliens, who have experience with “non-entities”. The aliens release a "sddire", a “rat-cat” being whose strange psychic powers drive Deadman out of the alien’s body and out of Earth’s dimension.

Retrieved from "https://heykidscomics.fandom.com/wiki/Aquaman_Vol_1_50?oldid=1409443"
Community content is available under CC-BY-SA unless otherwise noted.