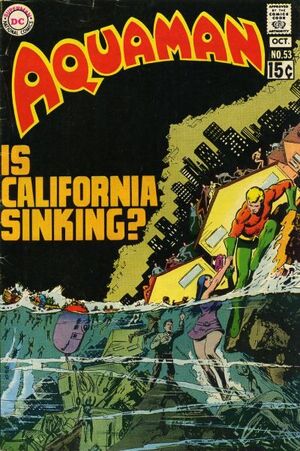 Remember -- I'm still the King of the Seven Seas! And if I wish I can command all the creatures of the sea to attack you -- at once!

Appearing in "Is California Sinking?"Edit

Synopsis for "Is California Sinking?"Edit

An agent of O.G.R.E., masquerading as a scientific researcher, visits the California home of millionaire Elliot Harlanson. He tells him that Atlantis is slowly rising and that if it continues, California will sink into the sea, thereby destroying Harlanson's luxurious, palatial home. Despite its greater implications, Harlanson refuses to let his home be destroyed and agrees to help the researcher in any way he can. The man tells Elliot that if he could finance the purchase of an atomic bomb, then they could destroy Atlantis and California would be safe. Harlanson agrees, though he has no idea of the man's true affiliation, nor the fact that Atlantis is actually a populated country.

To guarantee that Aquaman will be in Atlantis when the bomb is dropped, O.G.R.E. manipulates his old foe Black Manta into staging a fight with him. Black Manta and Aquaman square off and Aquaman summons an army of sea animals to attack Manta. The villain repels the barrage however by way of a scrambler device that affects the animals' nervous systems.

As Aquaman and Manta continue fighting, an O.G.R.E. submarine carrying the bomb nears Atlantis. Aquaman spies the ship and suspects that it intends on attacking Atlantis. He summons a giant squid to entangle the ship in its tentacles. Elliot Hanlanson is aboard the vessel and accidentally falls upon the lever which releases the bomb. Unfortunately, the submarine is too close to escape the explosion. It turns out that the bomb is a dud and the city is safe. Hanlanson is furious that the men he dealt with would trick him into purchasing an inadequate weapon.

Meanwhile, off the coast of Florida, Federal agents execute a sting operation against the members of O.G.R.E. They knew of the organization's plot to trick Elliot Hanlanson and had an agent named Honey James replace the real atomic weapon with a fake one. The FBI apprehend the O.G.R.E. thugs and the organization is dissolved.

Retrieved from "https://heykidscomics.fandom.com/wiki/Aquaman_Vol_1_53?oldid=1409446"
Community content is available under CC-BY-SA unless otherwise noted.