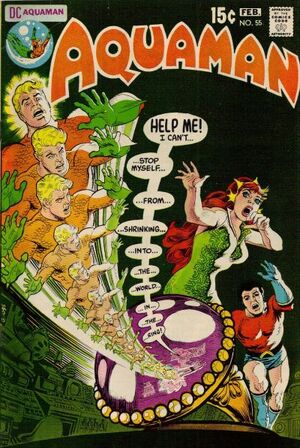 Appearing in "Return of the Alien!"Edit

Synopsis for "Return of the Alien!"Edit

In order to check on the girl Citizen, whom he left in the hands of alien slavers during their last meeting, Aquaman has Mera send him back into the universe within her ring. There Aquaman discovers the girl has learned from her slavers how to overcome her prejudice against communicating anywhere except in her “church”, and that she is now happy with her lot in life. Aquaman is pulled back into his own realm by Mera. Meanwhile, Aquagirl has become upset with what she calls the “reactionary ravings” of Mupo, the former rebel leader, and is turned off by Aqualad’s being too busy to see her, and Noxden, an Atlantean politician, starts making anti-Aquaman speeches and insisting on a democratically elected leader for Atlantis.

Returning from a trip to the surface world, Aquaman comes across a deserted metropolis underwater. He is quickly paralyzed by the power of a computer, which, in ages past, had controlled the minds of anyone over 30 years of age and made them into work-drones. The young people left the city, and their elders eventually died off. The computer intends to make Aquaman its new slave, but he telepathically summons an electric eel to short out some of its circuits and free him. Then he has other fish cause a cave-in at the cavern in which the computer is situated. Aquaman then leaves, feeling the menace is over, but the computer, though damaged, is still active.

Retrieved from "https://heykidscomics.fandom.com/wiki/Aquaman_Vol_1_55?oldid=1509162"
Community content is available under CC-BY-SA unless otherwise noted.