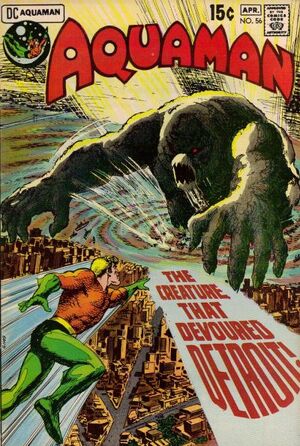 Appearing in "The Creature That Devoured Detroit!"Edit

Synopsis for "The Creature That Devoured Detroit!"Edit

Don Powers, who fights crime in Detroit as a costumed super-hero called the Crusader, has been hampered at night by his poor eyesight, but has devised and sent into orbit a mirrored satellite which provides daylight to the city at night and makes it possible for him to fight crime during those hours. However, the added daylight has caused algae to grow at an incredible rate in the area, and the mossy growth is threatening to engulf the city. When Aquaman hears of the problem, he immediately goes to Detroit and learns of Powers’s part in the plot. At first he is repelled by the Crusader’s employees, but he later manages to destroy the satellite and thus halt the growth of algae. The Crusader is accidentally killed in a fall.

Appearing in "The Cave of Death!"Edit

Synopsis for "The Cave of Death!"Edit

Aquagirl stops an Atlantean youth from entering the legendary Cave of Death, from which no human supposedly returns alive.

Retrieved from "https://heykidscomics.fandom.com/wiki/Aquaman_Vol_1_56?oldid=1502589"
Community content is available under CC-BY-SA unless otherwise noted.