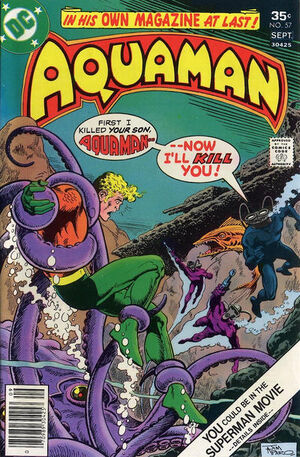 That's right, Manta, tell us all about costs -- and payments! Like the payment you owe me for my son's life!

Appearing in "A Life for a Life!"Edit

Synopsis for "A Life for a Life!"Edit

Aquaman wants revenge on Black Manta for the murder of his son, Aquababy. He tracks down the sunken submarine that Manta is using for his base of operations, but Black Manta activates a series of robotic marine lifeforms to intercept him. Aquaman briefly tangles with a huge robotic squid, but he manages to wrestle his way free.

Elsewhere, the Fisherman interrogates General Horgan as to the location of the Bellerophon. Horgan accidentally reveals that it had sank in the Mariana Trench.

Aquaman boards Black Manta's ship and makes his way to the control room. Before he can reach him however, Manta activates a device that electrocutes Aquaman. He then attaches him to an old World War II catapult and launches him into a deadly mine field. One of Black Manta's lieutenants, Cal Durham, betrays Black Manta and changes Aquaman's trajectory so that he doesn't hit the mines. With Cal's help, he returns to the ship and fights Black Manta. Aquaman flies into a rage and nearly beats Manta to death. The scared villain begs for mercy and Aquaman calms down. Manta is arrested and handed over to the Navy.

Retrieved from "https://heykidscomics.fandom.com/wiki/Aquaman_Vol_1_57?oldid=1524652"
Community content is available under CC-BY-SA unless otherwise noted.