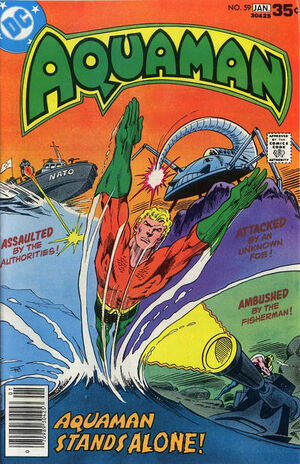 Unless I want to be transferred to the "Burial at Sea" roster -- I'd better get my fins in gear!

While on the search for the Fisherman, Aquaman runs afoul of a NATO vessel. The Captain of the ship orders Aquaman to leave the area as they are involved in a highly sensitive mission. Aquaman's temperament is bitter at best, and he has no interest in NATO or their mission. Suddenly, great geysers of rock and water erupt from the seas, threatening to capsize the ship. Aquaman summons some whales to create a safety channel for the vessel, then leaves to continue his search for the Fisherman.

He finally locates him at the bottom of the Mariana Trench where the Fisherman has discovered The Bellerophon. Aquaman doesn't know what is so important about this vessel, but he is determined to stop the Fisherman regardless.

Appearing in "The Kingdom of Doom"Edit

Synopsis for "The Kingdom of Doom"Edit

Mera arrives in Dimension Aqua and she is desperately searching for the healing device that will save the life of her son, Aquababy. Dimension Aqua has been taken over by the tyrannical Leron who has incapacitated the loyalist Xebel, a friend of Mera's. Mera confronts Leron and the two pit their hard-water powers against one another. Mera triumphs, but the strain proves too much for Leron and his mind snaps. Mera asks Xebel the location of the healing device, but he tells her that only Leron knew where such a thing was located. With his mind gone, there is no chance that he could reveal the information.

Retrieved from "https://heykidscomics.fandom.com/wiki/Aquaman_Vol_1_59?oldid=1409452"
Community content is available under CC-BY-SA unless otherwise noted.