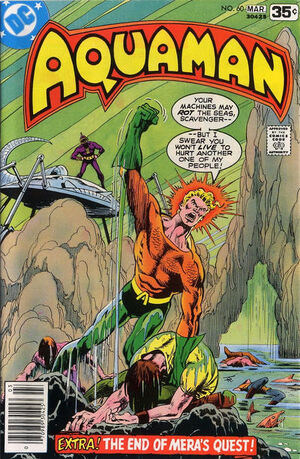 Having just dealt with the Fisherman, Aquaman is in a fit of rage over the recent death of his son and the sudden disappearance of his wife, Mera. While swimming towards home, he finds Scavenger purloining the ruins of the sunken vessel, The Bellerophon. The Scavenger tries to get away, but Aquaman sends some sea barnacles to intercept the villain's Scorpion-Ship. The Scavenger dispels the barnacles, but not before he accidentally wedges his ship between two stalagmites.

A short distance away, Kobra monitors Aquaman's fight with the Scavenger. He still has the captive General Horgan by his side. Kobra, still upset over the Fisherman's failure to kill Aquaman, has little confidence in the Scavenger and decides to personally intervene.

Aquaman attacks the Scavenger, but the villain uses his ship's modular legs to grapple with him, keeping him a safe distance away. He then activates a "Retriever Beam" to steal the cargo from the Bellerophon.

Kobra arrives and decides that he has had enough of the Scavenger's incompetence. He detonates the Scorpion-Ship, hoping that the blast will kill Aquaman. Aquaman survives however, but the villains get away.

Appearing in "The Edge of Nowhere"Edit

Synopsis for "The Edge of Nowhere"Edit

In Dimension Aqua, Mera prepares to brave the Pit - a chasm of untold horrors, in the hopes that she might find healing technology that could save the life of her son Arthur, Jr.. Xebel warns her not to attempt such a feat, but Mera has no choice. As she navigates through the pit, Mera is assaulted by several large elemental creatures. She uses her hard-water powers to fight past them and retrieve the item that she requires. As she returns to Atlantis, she discovers to her horror that she is too late: Arthur Curry, Jr. has died.

Retrieved from "https://heykidscomics.fandom.com/wiki/Aquaman_Vol_1_60?oldid=1524651"
Community content is available under CC-BY-SA unless otherwise noted.