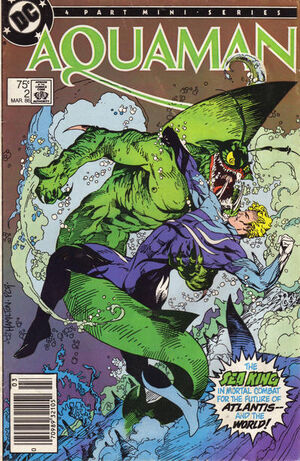 Flimsy manacles like these to hold me? Where am I, that you don't know of my strength?

King Bres of Thierna Na Oge has captured Aquaman and now holds him prisoner in her dungeon. He shares the cell with Bres' deposed sister, Nuada Silverhand. Aquaman struggles to free himself from his manacles, but they are composed of a mystic mineral called Orichalcum. King Bres and her entourage enter the prison to interrogate Nuada and Aquaman. She wants to know the location of an artifact called the Lia Fail. She believes Nuada has stolen it, and that Aquaman is her accomplice.

Bres uses her magic to scan Aquaman's mind, and learns that he knows nothing of their missing artifact. She is still convinced that he is a spy however, and sentences him to death. Members of the Tuatha De Danann bring the King of Atlantis to an arena pit, forcing him to defend himself against a hideous monster known as Sreng of the Firbolg.

The Tuatha De Danann channels the might of their magic into the Firbolg vastly increasing his strength. Aquaman attempts to use his telepathy on Sreng, but this yields little effect. Sreng's rampage causes the support columns of the arena to collapse. As carnage ensues, Aquaman summons a swordfish to ferry him away from the battle scene. He meets with Nuada, who has likewise freed herself and the two leave Thierna Na Oge.

Aquaman believes that the missing Lia Fail may be connected to the theft of the Seal of Atlantis. Nuada uses her magic to track the Lia Fail's location to a settlement known as Maarzon. When they arrive, they find that Ocean Master has taken command of the savage of Maarzon and now orders them to attack Aquaman.

Retrieved from "https://heykidscomics.fandom.com/wiki/Aquaman_Vol_2_2?oldid=1498304"
Community content is available under CC-BY-SA unless otherwise noted.