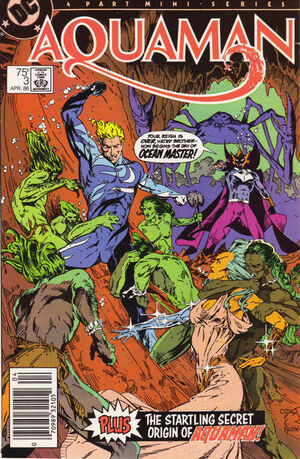 Ocean Master commands the savages of Maarzon to bring Aquaman and Nuada Silverhand to his citadel. In a surprising display of brutality, Ocean Master punches Nuada in the stomach, in the hopes of baiting Aquaman into attacking him. He then transports them from Maarzon to his private citadel.

Later, during their imprisonment, Aquaman tells Nuada of the origins behind his and Orm's rivalry. Aquaman's father, Tom Curry found an Atlantean woman named Atlanna and the two fell in love. Living together in Tom's lighthouse, they eventually gave birth to Arthur. Years later, Atlanna died and Tom remarried. He sired a child with his second wife, named Marius. Marius never developed the aquatic super-powers that Arthur had and because of that, he grew to despise him. As he grew into adulthood, Marius took the name Orm, and became the self-styled Ocean Master.

Ocean Master arrives in their cell and reveals that he is responsible for stealing the Lia Fail and the Royal Seal of Atlantis. Both items contain the original Zodiac crystals that once governed all magic in ancient Atlantis. Once he acquires the remaining ten, Ocean Master will be all-powerful.

Meanwhile, the soldiers of Atlantis forced Vulko to lead them in an attack against the surface world. They are convinced that emissaries from the surface are responsible for stealing the Royal Seal. Vulko doesn't want to attack the surface, but he is left with little choice. Suddenly, Ocean Master appears before them. Vulko uses this opportunity to divert attention from innocent civilians towards this new villain, but as suddenly as he appears, he disappears again.

Retrieved from "https://heykidscomics.fandom.com/wiki/Aquaman_Vol_2_3?oldid=1409459"
Community content is available under CC-BY-SA unless otherwise noted.