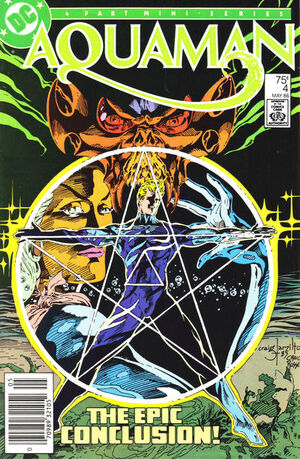 To quote the Munchkins - let the joyous news be spread! The Ocean Master gon' bust yo' head!

Appearing in "Thicker Than Water"Edit

Synopsis for "Thicker Than Water"Edit

Aquaman savagely rampages after Ocean Master, only to discover that the man who had been taunting him was nothing more than an illusion. The real Ocean Master is miles away inciting an Atlantean invasion of the surface world.

Nuada manages to calm Aquaman down and forces him to realize that he cannot defeat his brother through conventional means. He has most of the twelve Zodiac crystals now, and is nearly unstoppable. As magic is powered by emotion, Ocean Master has been able to intensify his own power off Arthur's nascent anger. The only way to effectively counter his magic is with stronger magic.

Nuada scribes a pentagram and uses her own powers to unlock the mysteries of Aquaman's mind. She sifts through his memories and brings to light the most joyous as well as painful moments of his past. He recalls his time with the Justice League, the marriage to his wife,

Retrieved from "https://heykidscomics.fandom.com/wiki/Aquaman_Vol_2_4?oldid=1526894"
Community content is available under CC-BY-SA unless otherwise noted.