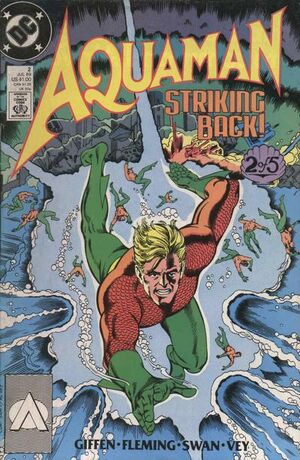 It takes more than strategy and sacrifice to win a war... it takes passion!

From one of the parapets of the Aquarium Prison, Aquaman and a young resistance fighter secretly watch an Atlantean transport line going back and forth to the prison. After hearing an explosion in the distance, Aquaman takes to one of the secret channels that runs beneath the facility. He returns to the prison block just in time for a routine inspection. Later, the Atlantean, Jared, and he go over battle strategies and memorize a map of the entire prison layout.

Some time later, members of the outside resistance movement detonates a bomb near the Atlantean Royal Palace. The invaders, concealed in their metal shells question their guards about the explosion. Aquaman knows that the young boy he met earlier is involved in the attack and wants to help him. The other inmates restrain him, citing that he risks everything should he leave now.

The Jellyfish invaders meanwhile, track down the boy responsible for the attack and have him executed. To send a message to the resistance, they rig a prisoner transport ship to explode and send it to Aquarium. Aquaman tries to prevent the attack, but he is too late. The ship blows up, killing hundreds of prisoners.

After much consideration, Aquaman determines that the invading force is actually a species of sentient jellyfish. He withdraws the sample he collected earlier and analyzes it. Now knowing what he's up against, he knows how to combat it. He rallies the other inmates together and tells them that they are going to bring the fight directly to the invaders.

Retrieved from "https://heykidscomics.fandom.com/wiki/Aquaman_Vol_3_2?oldid=1409462"
Community content is available under CC-BY-SA unless otherwise noted.