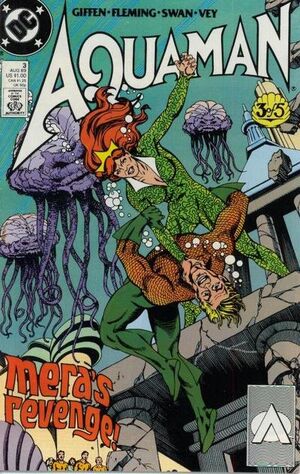 Appearing in "Queen to King's Seven"Edit

Synopsis for "Queen to King's Seven"Edit

The Atlantean drones report in to their jellyfish masters. They indicate that there has been a substantial increase in resistance activity and there is definite cause for concern. There is also news that Mera has escaped confinement at the hospice center.

Meanwhile, Aquaman rallies the Atlantean prisoners together and they escape the Aquarium via secret aqueducts. They plant canisters of poison gas beneath and around the Atlantean Royal Palace and wait for the proper time to set them off.

As Aquaman inspects the target areas, he finally comes across his wife Mera. Mera is insane with rage, and still blames Aquaman for the death of their son. She creates hard-water daggers and begins hurling them at Aquaman. Aquaman has no desire to fight his wife, and goes to great length to avoid her attacks.

The resistance fighters activate the gas canisters and the poison fills the royal palace, killing the jellyfish present. This is their first true victory against the alien invaders, but there are many more to deal with. Hope grows within their hearts, for now at least, they stand a chance of fighting back.

Back at the palace, Mera continues her attack against Aquaman. Aquaman assumes a defensive posture and judo-flips Mera backwards, accidentally impaling her upon an sharpened piece of metal. He looks on in horror as his wife lies dead before him.

Retrieved from "https://heykidscomics.fandom.com/wiki/Aquaman_Vol_3_3?oldid=1526895"
Community content is available under CC-BY-SA unless otherwise noted.