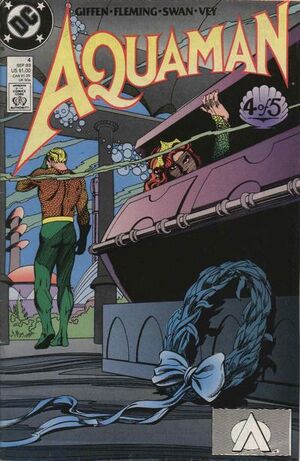 Haven't you ever wondered about the differences in our physiologies?? Haven't you ever considered that at all?? If I had a child with one of my own, it would have lived!! Your weak genes killed my baby!!

Appearing in "The Tide of Battle"Edit

Synopsis for "The Tide of Battle"Edit

While the war rages on, Aquaman is tasked with the solemn duty of burying his wife, Mera. One of the hospital staff members tries to console him, but he just wants to be left alone. Staring down at his wife's coffin, he silently apologizes for everything that has happened. Suddenly, the coffin lid springs open and Mera emerges, angry and very much alive.

Meanwhile the jellyfish invaders have abandoned the city to escape the poison gas. They take up position outside the perimeter of the dome for all to sea. The leaders of the invasion instruct their Atlantean drones to completely seal the city off, blockading them from their food and supply lines. If they cannot defeat the insurrectionists by force, then they will starve them out.

Resistance fighters man battlements throughout the city. Now that they have taken back Poseidonis, they will fight tooth and nail to keep it.

At the Atlantean Royal Palace, Aquaman is startled to see Mera attacking him anew. She reveals that her physiology is different from that of an Atlantean, and as such, her vital organs are not located in the same areas as a normal person. She still blames Aquaman for the death of her son and states that if he had been sired by a real man, then he might still be alive. Having virtually torn Aquaman's heart out, Mera decides to leave this world forever. She opens a spatial aperture and returns to her native Dimension Aqua.

Aquaman has little time to grieve however, he still has a war to fight. He consults with the Atlantean general and receives an update on the current situation. After taking some time to reflect on the situation, Aquaman divines a plan to fight back.

Retrieved from "https://heykidscomics.fandom.com/wiki/Aquaman_Vol_3_4?oldid=1526896"
Community content is available under CC-BY-SA unless otherwise noted.