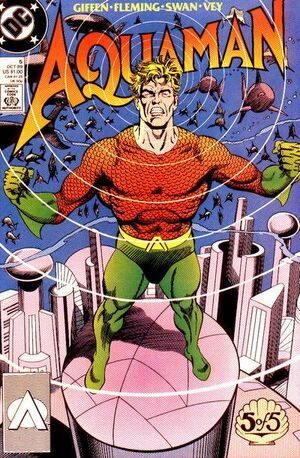 The seas were my mother and father. So no matter where I go in them, I'm at home. I am -- Aquaman

The invaders' drone soldiers maintain the perimeter around Poseidonis, blockading the resistance from food and supplies. The resistance soldiers push the line, but are quickly repelled. The giant jellyfish send orders to take out the resistance fighters strongest warriors in order to lower morale.

The Atlantean general leading the resistance is determined to continue making surgical strikes to leave the city, even though such a strategy is veritable suicide. His officers question the man's judgment, but he retorts, citing that they have no alternative.

The AHARD-1 health facility has been turned into a triage unit. The walls are packed with wounded soldiers and there appears to be no end in sight. The hospital is severely understaffed and they do not have the resources to care for so many.

Aquaman swims to the uppermost spire of the Atlantean Royal Palace. He knows now that the Atlanteans cannot take back their lands on their own. Pushing himself harder than he ever has before, he broadcasts a telepathic summons to every fish, cephalopod and marine mammal that he can find. A gam of whales storms the perimeter and smashes into the opposing armies, overturning tanks and battleships. Sharks and electric eels go directly after the soldiers and the seas turn into a cloud of red blood. Most of the jellyfish invaders are killed, but three of them choose discretion as the better part of valor and flee. Aquaman's telepathic commands overtax him and he collapses from the spire. The Atlantean loyalists catch him and praise his efforts. Their king has returned. When Aquaman comes to however, he tells them that he has no desire to resume his position as king. His duties are more broad than that, and that Atlantis now belongs to the Atlanteans.

Aquaman leaves and explores the depths of his true home - the oceans of Earth.

Retrieved from "https://heykidscomics.fandom.com/wiki/Aquaman_Vol_3_5?oldid=1409465"
Community content is available under CC-BY-SA unless otherwise noted.