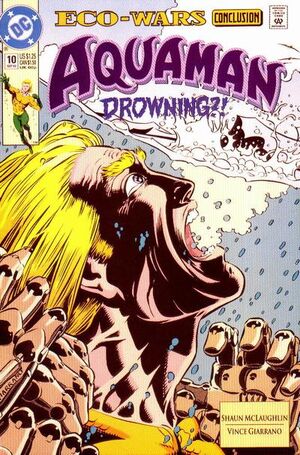 One of the Sea Devils, Biff, jumps in and drags Aquaman out of the polluted water after having jumped in to save a bird last issue. He explains to Arthur that he thinks Merrevale sabotaged its own oil rig, knowing the Sea Devils would hit it. Then when it spilled all of its oil into the water, Merrvale can do the clean-up, looking good to the world and turning public opinion against the Devils (the name "Sea Devils" probably doesn't help).

But the chemicals dumped into the water go awry, the head of Merrevale, a man named Wylie, then sends a phalanx of shock troops to go after the Devils and Aquaman.

While Biff goes to get the proof he needs to implicate Wylie, Aquaman takes matters into his own hands.Aquaman tips over the entire oil rig all by himself. Arthur then notices these shock troops are dressed just like the ones the country of Oumland used when they attacked Poseidonis (in Aquaman #'s 1 & 2), and realizes Oumland and Merrevale might be in on this together.

After taking out a few of them on his own, he calls on his finny friends to help the Sea Devils.One of the Sea Devils commandeers a local TV news chopper, showing the world the wreckage Merrevale has caused: hundreds of dead sea creatures floating in the river. Wylie panics and tries to cut his losses, and flips a switch causing tiny explosions inside the helmets of the shock troops, killing them all instantly. Yuck!

Aquaman and the Sea Devils talk it over, and they realize that, while they thought they were doing the right thing, Merrevale ended up using them as part of his plot. Aquaman then takes off for the U.N. just in time to see Poseidonis accepted into the organization. He then heads for Wylie's office and confronts him regarding his misdeeds with numerous members of the media and shows evidence to all regarding the destruction he has caused.

While the press slams Merrevale, a secret group called The Exchange decides what to do with Wylie. The Oumland U.N. rep offers to have him moved on to another nefarious project, while Wylie swears revenge on Aquaman

Retrieved from "https://heykidscomics.fandom.com/wiki/Aquaman_Vol_4_10?oldid=1409475"
Community content is available under CC-BY-SA unless otherwise noted.