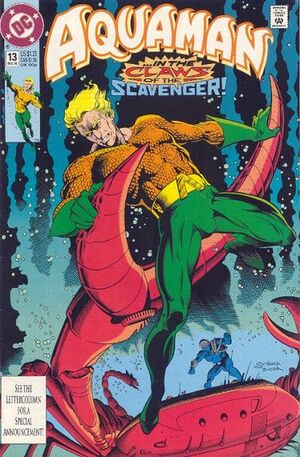 Nice morning. You just gotta look at 'em like you've never seen it before.

A little boy named Tony has terminal cancer and is going to die. His favorite super-hero is Aquaman, and he escapes from the hospital because he wants to meet him. Hitchhiking across the state to the ocean, he meets several people who give him false accounts of what they think Aquaman is like. The last man to pick him up is Peter Mortimer, formerly known as the Scavenger. He tells the story of how Aquaman helped him reform and start his own business.

Retrieved from "https://heykidscomics.fandom.com/wiki/Aquaman_Vol_4_13?oldid=1409478"
Community content is available under CC-BY-SA unless otherwise noted.