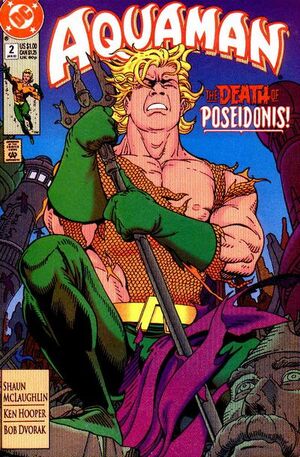 There's no need for heroic theatrics, Aquaman... just because you didn't return to Poseidonis in time... again.

Appearing in "Both Sides of the Issue"Edit

Synopsis for "Both Sides of the Issue"Edit

Aquaman and Vulko lie unconscious in the ruins outside of Poseidonis. The Oumlandian navy launches another torpedo aimed directly at Aquaman. A young Atlantean girl named Marin intercepts the torpedo and gives her life to save Aquaman. Medical staff arrive on the scene and Vulko is taken to the hospital. Aquaman awakens and goes to attack the submarines. He summons squids and octopi to entangle the subs, rendering them ineffective for any further attacks. Marin's mother, Beaki, approaches Aquaman and angrily tells him that her daughter died to save him. Both Beaki and King Thesily make Aquaman feel guilty for not having arrived in Poseidonis in time.

Aquaman swims to Oumland to negotiate a treaty. As soon as he appears on the beaches, Oumlandian shock troops open fire on him. One of their bullets actually manages to penetrate Aquaman's leg. The Oumlandian prime minister, Stom, orders his men to cease firing and invites Aquaman into his palace. Stom tells Aquaman that it was Poseidonis who initiated hostilities by opening fire upon Oumlandian vessels within the twelve-mile disputed region between the two nations. Aquaman views that this was little more than a border dispute and should never have escalated into a full-scale war. He warns Minister Stom to leave Poseidonis alone.

This international incident causes a ruckus within the United Nations security council. The delegates are uncomfortable with Atlantis' ability to amass such hi-tech weaponry without censure. They are further troubled by the fact that no one from Atlantis is present at the meeting.

Aquaman returns to Atlantis, and on the way, encounters an enigmatic whaler named Queequeg. Aquaman doesn't have time to deal with this, and he presses forward. As he arrives in Poseidonis, he finds that hungry sharks have entered the perimeter once protected by their great dome. A school of the predators bear down upon a group of Atlantean children.

Retrieved from "https://heykidscomics.fandom.com/wiki/Aquaman_Vol_4_2?oldid=1409467"
Community content is available under CC-BY-SA unless otherwise noted.