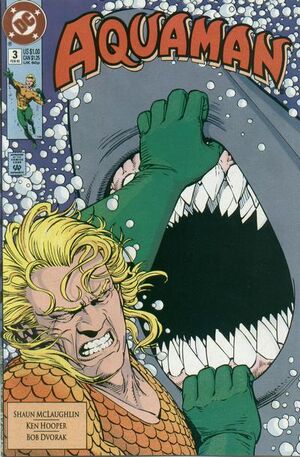 We must protect Poseidonis. They are defenseless. They have never lived with the sea as we have... the magics be with us... we will save them. We will prevail.

Appearing in "The World Around Them"Edit

Synopsis for "The World Around Them"Edit

A school of hungry sharks bears down on Aquaman and a group of Atlantean children. Aquaman tries to communicate with the sharks via telepathy, but they are not responding to his commands. Instead, he is forced to fight them off, while securing the children inside the old Aquacave.

Poseidonis is not the only Atlantean city with shark problems. In Tritonis, the warrior known as Iqula kills a shark, then berates another Tritonian for leaving an injured man behind. He brings his concerns to King Firtf, who tells him that the war in Poseidonis has brought sharks to both cities. Though Iqula shares no lover for the citizens of Poseidonis, he petitions King Firtf to provide them aid.

In the capital city, Aquaman saves King Thesily and Minister F'ancha from three sharks that were preparing to attack them.

At the hospital, Doctor Diade administers care to Vulko who was injured during the Oumlandian attack on the city. Vulko awakens, but his memory is faulty. He believes that Aquaman is still the king of Atlantis.

In Tritonis, King Firtf feels that Poseidonis is vulnerable and ripe for conquest. He orders Iqula to lead the army to take the city. Iqula believes that they must save the Poseidonians from themselves, and the only means to do so is by taking control of them.

Doctor Diade travels to the Aquacave to update Aquman on Vulko's condition. She tries to bolster Aquman's self-esteem, citing that Atlantis needs him now more than ever. An Atlantean soldier, General Keerg, arrives and informs them that the Tritonian army is amassing for an attack.

Retrieved from "https://heykidscomics.fandom.com/wiki/Aquaman_Vol_4_3?oldid=1409468"
Community content is available under CC-BY-SA unless otherwise noted.