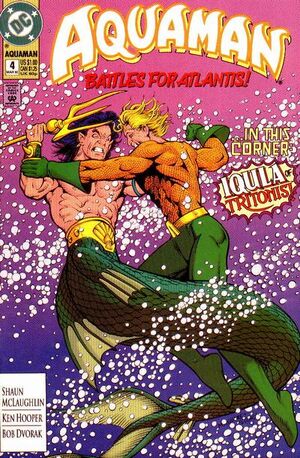 Appearing in "Tails and Legs"Edit

Synopsis for "Tails and Legs"Edit

Iqula leads an army of Tritonian warriors towards Poseidonis. His plans do not involve conquest however, but rather, protection. Now that Poseidonis' dome has been shattered, he feels that is the responsibility of his people to save the Poseidonians from themselves. He is met with resistance in the form of Aquaman. Aquaman knows that such protection would come with a price and he is not willing to simply hand the keys to Poseiodonis over to the Tritonians. Aquaman and Iqula fight one another and Iqula taunts him by invoking memories of his estranged wife and deceased son. While being swamped by Iqula's troops, Aquaman sends out a telepathic S.O.S. and the creatures of the sea come to his aid. Aquaman finally pins Iqula, and the merman concedes to the victor.

Meanwhile, King Thesily communicates with Mister Mission of the United Nations. Mission wants an Atlantean presence at the U.N. to go over the recent crisis in Oumland. Thesily elects to send Aquaman as the Atlantean delegate to the U.N.

Before Aquaman learns of his new responsibility, he stops at the hospital to check on Vulko. Vulko's memory is still fractured and he believes that Aquaman is still the king and that his son is still alive.

Aquaman swims to New York to attend the U.N. summit, but en route he runs afoul of the crazed whaler known as Queequeg.

Retrieved from "https://heykidscomics.fandom.com/wiki/Aquaman_Vol_4_4?oldid=1409469"
Community content is available under CC-BY-SA unless otherwise noted.