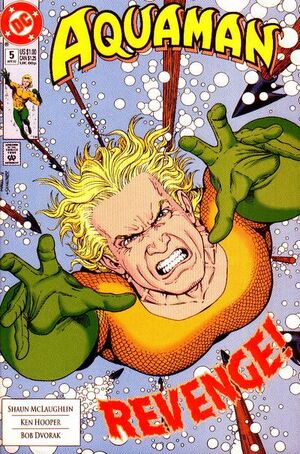 While en route to the United Nations, Aquaman encounters the whaler, Queequeg. After avoiding being struck by a torpedo, Aquaman doubles back, boards Queequeg's vessel and knocks him out.

Arriving back in New York, his original course is detoured as he discovers that his old partner Aqualad has been attacked and is near death. Aquaman meets with Aqualad's old team, the Titans, who watch over his convalescence at S.T.A.R. Labs. Aquaman decides to bring Aqualad back to the hospital in Poseidonis.

In Tritonis, King Firtf decides to take action against Aquaman and the surface world. He aligns himself with a mysterious foe, who likewise wishes to see Aquaman suffer. Though many of Firtf's warriors are ready to serve him, Lord Iqula has made peace with Aquaman and refuses to draw swords against him.

Aquaman returns to the United States and meets with Mister Mission and the Martian Manhunter. Aquaman addresses a public meeting of the U.N. security council outside the United Nations Building. Suddenly, King Firtf's secret partner, Black Manta, appears, flanked by a squadron of Tritonian troops. He begins attacking Aquaman, and the hero takes their battle to the sea. Black Manta retreats to the safety of his sea-saucer and fires a torpedo that destroys Mercy Reef, the final resting place of Aquaman's late son, Aquababy (who had been murdered by Black Manta).

Retrieved from "https://heykidscomics.fandom.com/wiki/Aquaman_Vol_4_5?oldid=1526897"
Community content is available under CC-BY-SA unless otherwise noted.