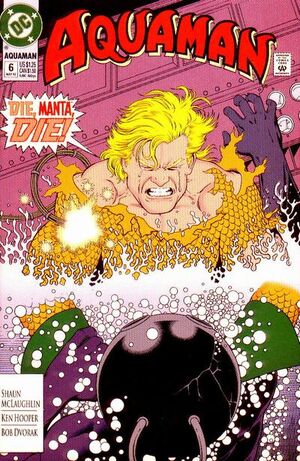 I was going to ask you why you hate me so much, Manta... but I'm just going to kill you.

Appearing in "The End of a Road"Edit

Synopsis for "The End of a Road"Edit

While Aquaman mourns the destruction of Mercy Reef, the other Atlanteans prepare their defenses against a possible strike from Black Manta. Aquaman approaches Poseidonis, but Manta intercepts him. He launches a device that attaches itself to Aquaman's head, sending a steady charge of electricity into his brain.

Manta then launches the next stage of his attack against the city. He introduces a variation of the Scarecrow's Fear Toxin into the city, overwhelming everyone with feelings of paranoia. Out of fear, the Atlanteans begin turning against one another, but Minister F'ancha keeps their spirits up, and convinces them that Aquaman will yet save the day.

Aquaman struggles against the effects of the electrical device and presses his attack against Black Manta. He smashes his way through the hull of the ship and the two begin swapping blows. As Aquaman draws close, Manta releases a spring-loaded blade from his costume, stabbing Aquaman in the chest. Manta leaves Aquaman to die aboard his ship.

From another dimension, a mysterious madman monitors the battle and laughs maniacally while whispering, "You are mine!"

Retrieved from "https://heykidscomics.fandom.com/wiki/Aquaman_Vol_4_6?oldid=1526898"
Community content is available under CC-BY-SA unless otherwise noted.