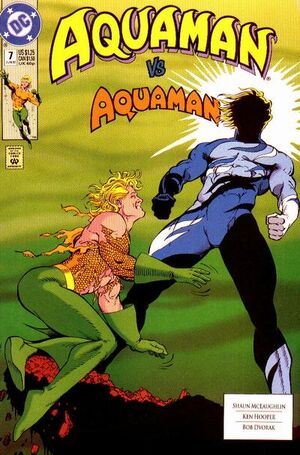 Come fight with me, little one. Come find out what the important things are.

Appearing in "What Matters Most"Edit

Synopsis for "What Matters Most"Edit

Aquaman's old foe, Thanatos, secretly monitors him from within his private chambers in Dimension Aqua. Having witnessed Aquaman suffer a severe injury at the hands of Black Manta, Thanatos decides to torment his adversary by manipulating his dreams. Aquaman sees visions of his old allies, the Justice League, turning their backs on him. He also sees visions of Mera and his late son, Aquababy, both of whom continue to blame Aquaman for Aquababy's death. Aquaman eventually wakens and finds Doctor Diade and Vulko standing over him. He asks Vulko if he believes Aquababy would ever forgive him for letting him die, and Vulko tells him that he does.

Retrieved from "https://heykidscomics.fandom.com/wiki/Aquaman_Vol_4_7?oldid=1526899"
Community content is available under CC-BY-SA unless otherwise noted.