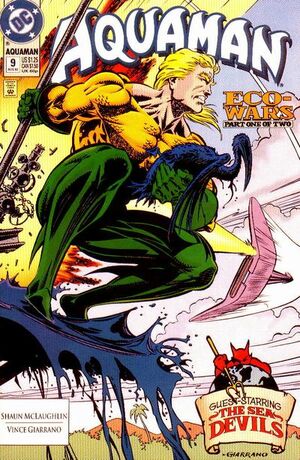 I want you to feel the choking fear.

An oil rig, drilling in the Icana River is suddenly attacked by three people flying some sort of ship. They blast away, setting off an explosion. Are these people...the Sea Devils?

Meanwhile, Aquaman is on a plane, headed to the U.N. in New York. His once-hourly need to get water is met when a buxom stewardess "accidentally" spills a glass of ice water on him.

Anyway, after taking some heat from King Thesily for not letting the police handle Nicodemus (last issue), he is asked to meet with the U.N.'s Secretary General.

He is told about the Sea Devils' attack, and that they have plans for another one. Since they are U.S. citizens, they don't want to use American troops, but perhaps Aquaman could "talk" to them...? In return, they promise to think favorably towards Poseidonis, and its upcoming vote in the U.N.

Aquaman agrees, and he makes a classic superhero exit/entrance.

Meanwhile, we find the Sea Devils arguing with one of their own--Biff, who left them to work for "the other side."

Aquaman discovers all the massive ecological damage the spilled oil has caused--fish and birds choked in the goopy mess. Aquaman is less than pleased.

Aquaman finds the Sea Devils, still fighting amongst themselves, and shows them what has happened. The Devils' leader, Dane Dorrance, swears they never intended to blow up the rig, a bomb was set to frame them.

Aquaman thinks this is paranoid nonsense, and he tends to more important business: warning all the animals and sea life out there to stay away from this ecological disaster. When he does, he is met with overwhelming waves of fear, something he's keen to share with Dorrance.

Aquaman, Biff, and the Sea Devils then look into capping the still-spilling oil well, which Aquaman accomplishes. Biff notices something that looks like sabotage, and thinks Dorrance might be telling the truth.

This turns out to be a plot by the Merrevale Oil Company, who did this to frame the Sea Devils in the eyes of the public, turning them from Environmentalists to Eco-Terrorists. Unfortunately, they didn't realize Aquaman would get involved.

But luckily for them, the second part of their plan can still move forward: under the guise of putting in a series of microbes called The Eaters that will supposedly eat up all the spilled oil, Merrevale has put a death sentence out on all the sea life. Aquaman, at the moment, knows nothing about this.

When Aquaman sees some of the pelicans writhing in pain while in the water, he dives in to save them. Then the same thing starts happening to him! To be continued!

Retrieved from "https://heykidscomics.fandom.com/wiki/Aquaman_Vol_4_9?oldid=1517423"
Community content is available under CC-BY-SA unless otherwise noted.