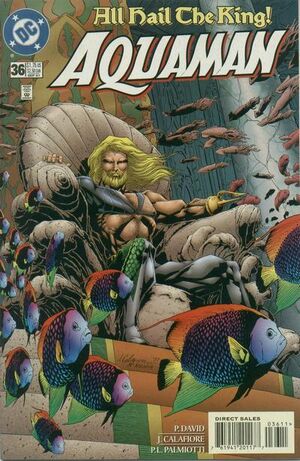 You think your new powers and name and costume impress me? Me?!

The tense relationships between the mer-people of Tritonis and the displaced Poseidonians comes to a head. Koryak addresses King Iqula and tells him that his people's service to Tritonis is going to end. Iqula is surly and ready to fight Koryak to the death. Tempest arrives and challenges King Iqula for the sake of his people. He stands calm and defenseless, awaiting Iqula to run him through with his spear. Fortunately, Tempst calls Iqula's bluff and the mer-man lowers his weapon. In anger, he tells Tempest to "take them and be damned." Tempest begins leading the exodus back towards Poseidonis.

Aquaman greets his fellow Atlanteans as they re-enter the city of Poseidonis, which now floats atop the surface of the Atlantic Ocean. They inquire if he intends on returning the city to its proper position, but Aquaman tells them that Poseidonis will remain where it is as a reminder to other nations that Atlantis is still a world power.

A short time later, Tempest comes upon Dolphin and the two begin talking. There is clearly romantic tension in the air and they begin to kiss. Aquaman discovers them and flies into a rage. He is still infatuated with Dolphin and feels that his former sidekick has stabbed him in the heart. Aquaman goes berserk and unleashes a bevy of blows against Tempest. After venting his rage, he leaves the bruised super-hero lying on the ocean floor.

Elsewhere, Vulko continues to serve as friend and mentor to Aquaman's son, Koryak. He reminds him that he is heir to the throne of Atlantis and feels that there is a great future for the boy. He brings him to the Atlantean Royal Palace and tells him to try out the throne for size. Koryak sits in it, smiles and says "Feels like home".

Retrieved from "https://heykidscomics.fandom.com/wiki/Aquaman_Vol_5_36?oldid=1409515"
Community content is available under CC-BY-SA unless otherwise noted.