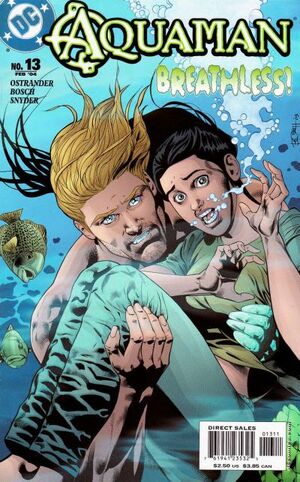 The shock wears off and then you feel everything. After awhile, it's not so raw. It never goes completely away, but... maybe it shouldn't.

Aquaman attempts to rescue a family out at sea on their vacation boat during a perfect storm. The dysfunctional Catholic family agree that when there's no other option and he can only carry two of them back at a time, their daughter Jennifer should go by herself so he can come back faster with scuba equipment. Aquaman returns after bringing her back to shore, but finds Elizabeth and Roger Malone dead in each other's arms underwater. Bringing them back home for a proper burial, he helps the girl come to terms with her loss by telling her about the death of his son.

Retrieved from "https://heykidscomics.fandom.com/wiki/Aquaman_Vol_6_13?oldid=1526902"
Community content is available under CC-BY-SA unless otherwise noted.