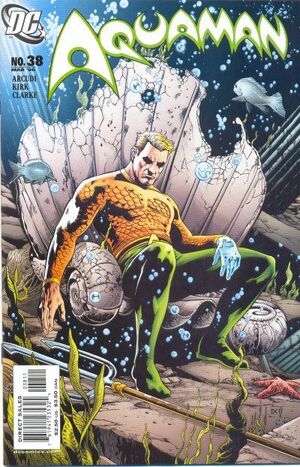 Now, suddenly, I see all the things I could have done to fix the problems between us, to really make us father and son. Everything seems possible -- now that nothing is possible.

Green Lantern, Doctor Mid-Nite and Hourman attempt to help the beleagured people of Sub Diego. Aquaman meanwhile, discovers that Vulko has been killed. Lorena finds him and the two begin searching for Koryak. To make matters worse, they find that Koryak is dead as well. Aquaman tries to maintain his composure, but Lorena cannot contain her grief.

Elsewhere in the city, dozens of Atlantean ships arrive ushering in food and people. Black Manta and his crew manage to hide within the trail of sea crafts. Two Sub Diego officers see his ship and go to inspect it, but one of Manta's trigger-happy lietenants kills them with an eletrical discharge. Manta is angry at his henchmen for risking their exposure.

Aquaman takes some time to himself and reflects on the past. He steels his courage and swims back to the ruins of Sub Diego. He tells Lorena that they can no longer live in the past. It's time to go home.

Retrieved from "https://heykidscomics.fandom.com/wiki/Aquaman_Vol_6_38?oldid=1505276"
Community content is available under CC-BY-SA unless otherwise noted.