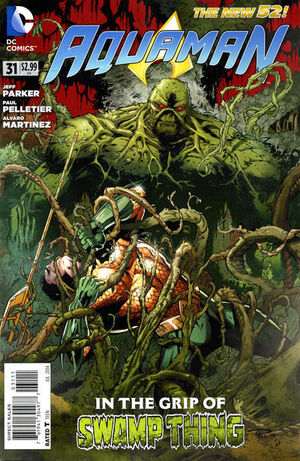 I stand as the Avatar of plant life so that no one else who actually would harm the balance can have that role. And when you fight me, you fight the plant life of the whole world.

Appearing in "In The Muck"Edit

Synopsis for "In The Muck"Edit

In the Louisiana swamps, Aquaman and Ya'Wara are seeking the Swamp Thing - and have been for the better part of a day. Alas, despite a brief encounter with some of the guests at his old home in the swamps, Arthur has not seen any sign of the Swamp Thing's presence.

Nearby, a pair of hunters following the legend of the swamp-creature encounter yet another of the Swamp Thing's husks with disappointment, having hoped to capture it on film and overtake bigfoot as the biggest cryptid legend out there. They are surprised when the Swamp Thing emerges nearby and destroys their camera equipment warning that their search is over. When he hears that they have filled their tranquilizer darts with herbicides, he becomes angry and grabs one up in strong vines. In that moment, Arthur leaps out of the swamp water, and knocks the creature to the ground, warning him to let the man go.

Arthur complains of the Swamp Thing's decision to fill all of the planet's oceans with algae. Alec must concede that he did, but only to assure the Parliament of Trees that he intended to protect The Green - it was not meant as a threat. He had taken the role of Avatar of the Green in order to ensure that nobody who would harm the balance of life took the role.

Meanwhile, in Atlantis, Queen Mera ventures into a part of the empire that she has never been to before in search of the people who tried to kill her, learning that the deeper she goes, the more traditional and provincial are those who dwell there - not to mention paranoid and xenophobic. These dwellers of the deeper regions of the sea are also less prepared for exposure to the surface, requiring goggles to protect their eyes from the sun. While some would prefer that these people were more adaptable, others feel they are the purest of Atlanteans.

As they swim deeper, Elder Koah warns that those they encounter in the Cover will likely be supporters of Orm. The former king's sister Tula has accompanied them as well - a trusted adviser to Mera - and she is certain that the plot to murder the queen was formed in the Underrealm - a place where even Arthur may never have been. For that reason, the Underrealm has a culture of its own, operating without the oversight that the rest of the kingdom enjoys.

Not long after arriving, some of the Underrealm's citizens recognize Mera as Arthur's Queen and attack her with massive electric eals. She sends them back to their masters, warning that she refuses to die. She demands of them who it was who sent the assassins for her. Further dwellers of the Underrealm appear, warning that they all want to see her and Arthur dead. With her arrival there, they no longer have to plot to kill her - they can just do it.

Back in the swamp, Swamp Thing subdues Arthur and Ya'Wara, warning that they cannot solve their problems by punching them. He explains that he has had many predecessors, and not all of them have cared about the balance between plant and animal life as he does. Ignoring him, Arthur calls a group of alligators to rip the Swamp Thing apart. Freed, Arthur only has moments to gloat before the Swamp Thing rises up, towering over him, warning that he is not just the protector of plants - he is all plant life. The imbalance that Arthur fears in the algae will not occur. He will not allow it to occur. Grunting, Arthur demands to know what, then, is the cloud of plant life that has been causing havoc in the Philippines, destroying the Apo Reef since the algae grew. This news troubles Alec, and he leaves to investigate, causing the husk he leaves behind to crumble and collapse on top of Arthur and his companion.

Meanwhile, at Triton Base in the northern Atlantic Ocean, Doctor Shin learns that Dr. Orson has been trying to graft cells beyond the bounds set by the Triton directors. Angrily, he warns Orson to give up his research, but the scientist suggests he observe his experiments before making any judgments. He has used the body of a Mr. Coombs as the base for grafting new parts, creating a chimera with an implanted cerebral command unit that will make it completely at the disposal of the Triton Directorate.

Retrieved from "https://heykidscomics.fandom.com/wiki/Aquaman_Vol_7_31?oldid=1483549"
Community content is available under CC-BY-SA unless otherwise noted.